Satwiksairaj Rankireddy and Chirag Shetty will always have Paris.

When the Eiffel Tower is lit up and the duo snatch a quick click in a fading evening soon after they win their biggest Tour title yet – the French Open Super 750. Or when Paris’ energy conservation drive – saving up for the winter with the end of Ukraine invasion not in sight depriving them of Russian oil – throws the architecture of the French capital into stark silhouettes, biding their time.

“Even when they switched off the lights, those monuments and buildings in Paris looked so beautiful. A very friendly embassy couple drove us around and though all lights were shut, I really enjoyed the sights. There was the opera music building, some museums and a bridge, Chirag knows these things better. They said it would’ve been better if the lights were on, but we really enjoyed taking it all in, in that drive,” Satwik says of a quiet, poignant but uplifting celebration of their biggest career title – in that shared car ride with their hosts. Satwik-Chirag would pause at viewing bridge to gaze at the majestic outline of the brooding unlit Eiffel tower.

Earlier during the match, the duo’s Danish coach Mathias Boe had patted them on the back for something Satwik says he heard for the first time – Boe was actually praising them. “He never praises, but he said he was happy about how ‘you two had stuck together even when things got tough’.”

Thrice this week, things got knotted quickly after the Indians seemed to be comfortably leading – situations from where the World No 8 Indians, have previously lost. Paris is different, Satwik-Chirag are different now. “I’ve realised this about Chirag – If I can push upto the 15th point or atleast the first 11-12, he gets the confidence and finishes it for us. He’s amazing in the last four points, and it’s always a matter of time and he can win it all alone because he gets into the zone quickly if I give him early confidence. Getting good fast is tough for me, I’ll mess up if I’m feeling off! But for Chirag, I just need to convince him early that ‘I’m there with him all the time.’ He’s brilliant after that,” Satwik raves about his partner. 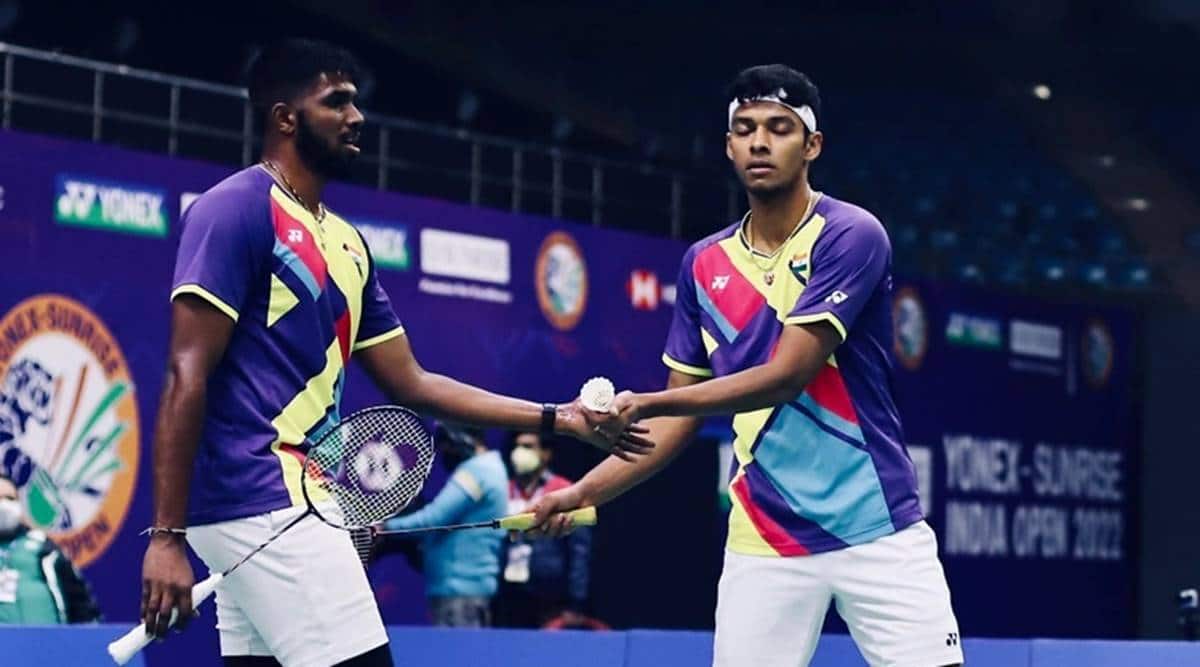 Paris felt different because the demarcation of duties had cleared out like lifting of a fog. “So tactically, I’ll focus on service, Chirag will handle the rest, etc. We knew what each of us had to do, no confusion. There was clarity so we were not worrying about the partner’s role, knowing he’ll take care of that, I’ll focus on mine. Mathias has been stressing on it, but it came together well this time. He said if opponents play well, fine, appreciate it, we have many tournaments to fight. But here stick to strategy and your role,” Satwik explains.

Boe was often seen urging them to stick to the plan, be aggressive, reassuring them with “You know what to do”. After the Indians beat World No 1 Yugo-Kobayashi, he had told them the win had come from them playing only 50-70 percent of their game. The math can be debated, but it fortified the Indians like a placebo confidence taking them all the way to the title.

A couple of other things changed from Odense where they played quarters to Paris. “The shuttles. Victor shuttles in Denmark were too fast and the drift was wild. But Yonex shuttles at Paris were comfortable, you could open up the court and defend and control them better. Huge difference,” Satwik said. The strokes got going, they stuck their defensive retrieves, strike good lengths especially on the lifts. Many factors maketh the Paris dream.

No #MondayBlues today for obvious reasons! 🥳🥳

Satwik’s defense has been trolled as shoddy. He had accepted the criticism but corrections took time. “Mathias and I had been working on it for a long time. But to be honest I took a lot of time to understand the importance,” Satwik explains.

“I saw defense as restrictive and felt I couldn’t play my natural game. I began thinking I have to hit straight only to defend, when I love smashing crosses. But these last few months I’ve realised I just have to mix it up and respond to opponents and be ready for them. Now I don’t feel like I’m dictated to play an unfamiliar style, I’ve begun enjoying my defense,” Satwik said.

The hesitation has wafted away like a bad dream, and the duo back themselves to win, even when opponents creep close. Boe’s impassioned hectoring through the fortnight saw results. “He kept saying, move your feet 100 percent. Keep moving, be aggressive in receiving serve, stay sharp, keep pressure. We were earlier just waiting and slow to react and losing points on taps,” he added. Like the Opera Garnier and Opera Bastille, Boe was urging for all the tapping to be in the twinkling feet, staying on the toes, and Boe’s bouncing boys finally cracked court movement at Paris.

The Indians had lost the opening set of the French Open first round to local Popov brothers. “It was an amazing crowd. They were mad. Cheering every point, not just encouraging the French. We lost the first, but after that Chirag laughed and said forget it, let’s end this noise. Second and third games were easy,” Satwik laughs. The crowd din never abated. “Shouting became OK.”

Usually put up at a hotel 200 metres away, this time the Indians were booked into an apartment hotel. The first two days they revisited old eating haunts (they have a final, and a pair of semis and quarters in Paris and know the arena’s vicinity intimately.) “This time it was 1.8 kms away by bus. It meant we had to follow shuttle bus schedules. Or miss it for the next hour and half,” Satwik says.

It meant they couldn’t linger on in the limber-down for stretching, and had to rush to the bus. The short bus ride was a straight road to the stadium – not much to see from windows. But having access to a cooking module inspired Satwik to rustle up meals. “I was getting bored, so I decided to cook. There was a market nearby so I’d buy chicken and start cooking in the evening. Heat rice in the oven and chicken the way I like it. It was good because otherwise I’d keep using the phone and all negativity would come in. This distracted me, and I stayed away from the phone and cooked listening to music or talking to my brother. It was calming,” Satwik says.

Beating the Japanese World No 1s was the highlight of the week, and the Indians would run into former coach Tan Kim Her, who was with the Japanese. “I just said Hi Coach to him, see you on court tomorrow. After the match he was very angry with his players. I know how it is after losses, so I didn’t want to barge in. It’s tough,” he says maturely. Even at 19-17, Satwik-Chirag were confident it wouldn’t spill over into a third. “3 games, chance hi nai, we were confident.”

There’s something special about Satwik-Chirag and the French Open! 🤩

The Indian duo beat the World No. 1 pair of Takuro Hoki and Yugo Kobayashi of 🇯🇵 to move into the semis of the BWF Super 750 event.#BWFWorldTour | #FrenchOpen2022 | #Badminton

The Indians even empathised with the Chinese Taipei pair they beat in the final. “They were like we were in 2019. Shivering hands, nervous. They played really well in the second coming from 20-17 to 20-all. But I knew where to hit, hum toh idhar hi khelenge. Chirag was brilliant last 4 points.”

Satwik is aware that what worked in Paris might prove difficult against Minions (0-10) or Aaron-Chia (0-7). “It’s a good sign we are beating others in straight games. But yes we just have to keep getting better at what we do, and we will crack those puzzles. We are confident,” he adds.

It was while internalising the importance of defense that Satwik found another area to improve, which drew praise from Boe. While Chirag routinely was setting up the kill shots for him from the forecourt, Satwik realised his own weak defense was inviting hell-fire on Chirag in turn. “It’s about getting a very good high first lift which is most important. My short lifts were a problem for Chirag because I was exposing him to easy attacks. My high lift was our best defense. A bad lift meant we were vulnerable. I wanted to ensure I covered for him just like he set up attacks for him,” Satwik says.

At some point, with both Chirag and Satwik working hard to make up for each other’s shortcomings while sticking to their assigned zones, a beautiful partnership won in Paris.

FIFA World Cup: After a rollercoaster journey to reach the starry heights, lights go out for Lukaku on the biggest stage

We don’t need to be told what to do on democracy: India’s Permanent Representative to the UN Amb Kamboj