When one goes to Hathin and asks for Shahbaz Ahmed’s house to any of the town folk, the reply comes, “wo RCB ka cricketer na, dusra tallat bahut mast ban raha, aapko duur se hi nazar aa jaayega (That RCB cricketer no, his house’s second floor is quite amazing, you’ll notice it from a distance).”

There is nothing fancy about the house but the kids playing on the streets take inspiration from Shahbaz’s house. Because it gives them inspiration that if Shahbaz, who learned the basics of his cricket on these streets and went on to play for India, one day they can also do it.

Shabaz has given hope to the youth of Palwal, one of the more under-developed

regions of Haryana, second most after Mewat.

Ahmed’s residence has every possible modern amenity in it. And his father, Ahmed Jan, like any proud middle-class father, says, “Uska diya hua kuch nah hai. Mai Harayana government mey kaam karta hun, meri salary achi hai, mai ye saari facilities afford kar sakta hun (I have not taken a single penny from Shahbaz. I am an employee of the Haryana government, my salary is good, and I can afford all the facilities,” says the clerk in the sub-divisional magistrate’s office in Haryana’s Nuh district. “Usne apne IPL ke paise se Kolkata mey car khareed li, lekin nikaal nahi pata kyunki itni traffic hai udhar (He has bought a car from his IPL money in Kolkata, but is not able to drive because of the heavy traffic in the city),” says Jan, who is referring to the IPL auction money (Rs 2.4 crore) that he received from RCB.

After all these years, Jan is still miffed with the fact his son, an ‘A’ grade student, randomly decided to quit his studies to play cricket.

“Like any middle-class family, we do love watching cricket, in fact, I have played till college, but education has always been our priority. My father, Mohammad Ishak was a headmaster, I am a government employee, my younger brother is a teacher, and my daughter is a doctor. Even Shahbaz was a brilliant student, he got 80% in Class X, and 88% in XII. Never in my wildest dream did I ever think that he would quit studies to play cricket. Koi baap nahi chahega ki uska beta padhai chhod ke cricket khele. (No father would want his son to play cricket at the cost of education,” says Jan, who has now been given a earful by his wife and Shahbaz’s mother Abnam. 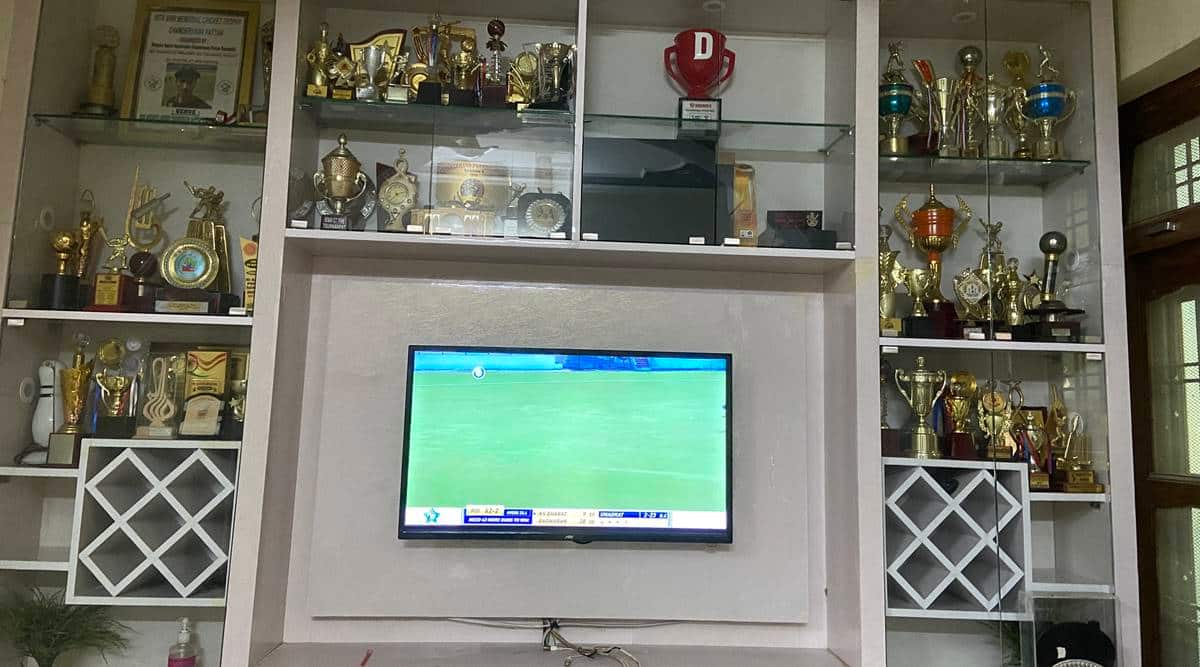 Shahbaz Ahmed’s trophy self at his home in Palwal. (Express Photo by Pratyush Raj)

“Ye abhi tak 2015 mey hi hai. Mai bhi chahti thi BTech complete kare, achi job le, magar aapko apne bacche ki bhi toh baatein sun leni chahiye ki wo kya karnaa chahta hai. (He (Ahmed) is still living in 2015. I also wanted him to complete his engineering, get a good job, but at times, you have to listen to your kids also, what they want from life,” says Abnam with a beaming smile on her face.

Ahmed says, he is happy that Shahbaz has completed his degree during the lockdown. But now his major concern is to build a trophy shelf in the newly-built room of Shahbaz on the second floor.

“I wanted to build a separate small room for his trophies, but his mother and sister love to show off, and they don’t want it. I have asked the contractor to make a bigger one in his room only,” he says.

Dropping out of engineering

Ahmed and Abnam can’t forget the day when they received a letter from Shahbaz’s college that he had not been attending classes for months. The worried parents visited him in Gurgaon, but he was not there, as he had gone off to play cricket. They went to the college and then got to know that he was bunking classes. “It was the first time we came to know that he loves playing cricket. In fact, he had even attended Haryana U-19 camp for the past two years,” recalls Ahmed.

Then came the moment which shook both Ahmed and Abnam as Shahbaz told them that he wanted to move to Kolkata to pursue his cricketing dreams and he would have to drop out of college.

“He was determined to do something big. Even his college professors told him that it was a mistake because he was a good student. Shahbaz told his head of department that ‘one day you will give me my degree and also felicitate me.’ And last year it happened,” says the proud mother.

Shahbaz would move to Kolkata, where he initially shared a small 12×12 room with three other cricketers.

“He didn’t know how to cook, so his job was to clean the utensils,” says Jan. Shahbaz Ahmed’s father, Ahmed Jan, and his mother Abnam at their residence in Palwal. (Express Photo by Pratyush Raj)

Shahbaz would hate the food, was regularly labelled ‘outsider’ and even thought of coming back after he was banned from playing cricket. However, only after the Cricket Association of Bengal (CAB) conducted an investigation and gave him the go-ahead, could Shahbaz play again. But the only thing that kept him going was his father’s words when he was packing his bags before going to Kolkata.

Shahbaz started playing in the second division, and one day he was introduced to Partha Pratim Chowdhury by Pramod Chandila (Former Bengal and current Haryana cricketer), who got Shahbaz to Kolkata. Chowdhury, impressed by Shahbaz’s skills, helped him to get into Tapan Memorial Club, and very soon, he became one of his family members.

Shahbaz’s performances caught the eye of the then Bengal skipper Manoj Tiwary. There were reservations about Shahbaz because he was not originally from Bengal, but Tiwary was adamant and finally had his way. 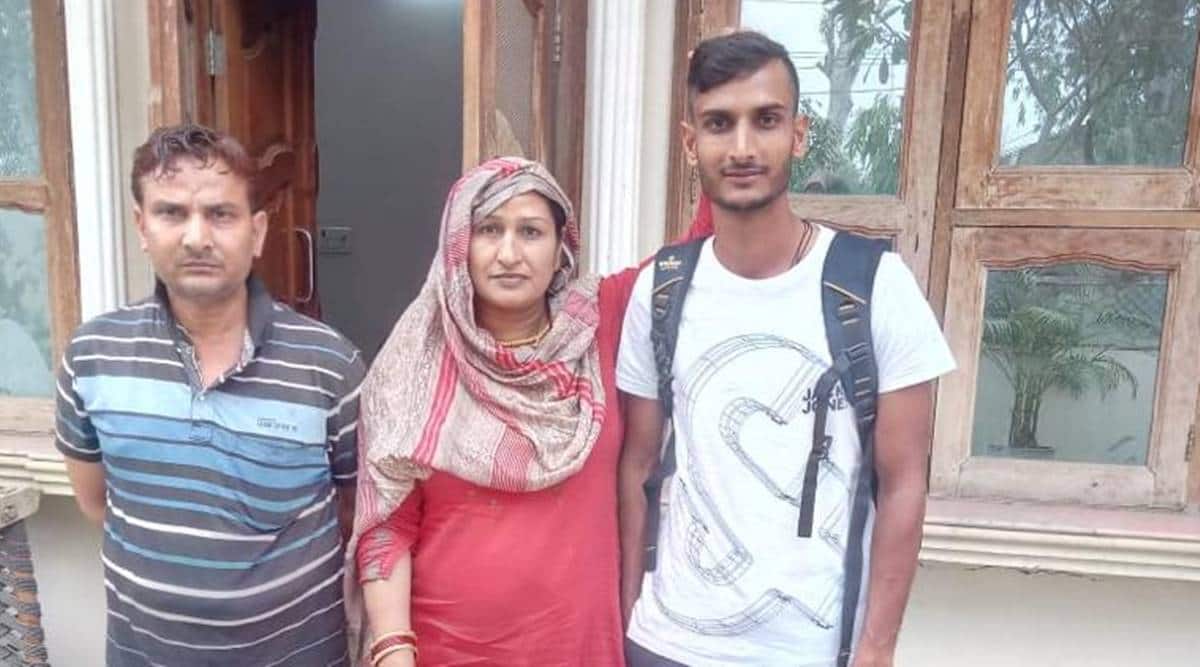 If Tiwary took Shahbaz under his wings, it was Bengal coach Arun Lal who made him a bulwark. Shahbaz, who Lal calls ‘Jaanbaaz (daredevil)’ became Bengal’s crisis man. He was instrumental in Bengal reaching finals of the 2019-20 Ranji Trophy. The all-rounder scored 509 runs with the bat and bagged 35 wickets with his left-arm spin. In the 2021-22 season, he scored 582 runs and bagged nine wickets in five matches. In his three years stint at the Royal Challengers Bangalore, Shahbaz became one of the pillars of the franchise and has shown prowess as an all-rounder.

“He got a father figure in Tapan bhai, an elder brother in Manoj Tiwary, and a mentor in Arun Lal. I am yet to meet any of them, but we are planning to visit Kolkata later this year to show our gratitude to them. It is because of them, Shahbaz has reached this level. I will cook biryani for all of them,” says Abnam.

No booze? No problem for most fans at World Cup in Qatar