Last week, Sardar Azmoun – nicknamed the Iranian Messi – did something unthinkable. In a social media post, the Bayer Leverkusen forward, one of the most high-profile players in Iran, spoke against the country’s establishment, supported the protests that have engulfed the nation and added he didn’t care if he was sacked.

Azmoun deleted that post and put up another less harshly-worded statement but his stance didn’t waver. Already a star in his country, Azmoun’s popularity skyrocketed since. But it has, as Iranian football experts have pointed out, put his place in the national team at risk. For, there are few places in the world where politics and football are so closely intertwined.

And Azmoun is not alone

Following the death of Mahsa Amini, a 22-year-old woman who died in police custody in Tehran on September 13, arrested for not wearing the Hijab, protests have erupted across the country, and Iran’s football team have joined in. And less than two months before the World Cup begins, it has put the team, already distracted by last-minute change of coaching staff, under more spotlight.

Last week, during their final match ahead of the World Cup against Senegal, the Iranian team came out of the dugout wearing black jackets to cover their national team logos during the national anthem in support of the women of Iran.

Sardar Azmoun risks state persecution for being the first #Iran football star to condemn the suppression of #IranProtests.

There is an air of anticipation around Iran’s run at the World Cup in Qatar – the first to be held in the Gulf region – this year. The team will be led up top by Azmoun (if he keeps his place in the side despite his statements) and FC Porto’s Mehdi Taremi, who was one of the most lethal goalscorers in Europe last season.

They have rehired, albeit controversially, Carlos Queiroz as head coach, who was with the team at Brazil 2014 and Russia 2018. Queiroz was formerly at Real Madrid for a season, and Sir Alex Ferguson’s assistant at Manchester United for five seasons.

Iran have never made it to the knockout stages at the World Cup, and now it is with the prospect of doing so at the expense of their historic geopolitical rivals, the United States. Trumping them – or England, who are also in their group – on their way to a historic run gives them the opportunity to score plenty of political points, internationally and with Iran’s people, much like their 2-1 win over the US at the 1998 World Cup did.

Amini’s death and the protests in the country, however, have changed the background in which the World Cup is taking place and underline the disadvantages of excessive political involvement in football.

This is the #Iran national football team, they wear black out of solidarity to the people of Iran. #MahsaAmini #مهسا_امینی pic.twitter.com/1yJFVdnfGE

If players are to be punished for their statements, the likes of Azmoun, who have the potential to be very dangerous for Iran’s opponents, will likely be left out of the team. Additionally, an excellent run in Qatar may be used by Iran’s players and travelling fans as a platform to make their voices heard, and gain international recognition. Against Senegal, in a village outside Vienna, Austria, the fans’ protests were heard the world over.

It has been a contentious buildup even prior to the World Cup, and most of Iran’s political establishment’s moves have come in order to be able to take credit for the national team’s success. But they could also feel the heat of the national team’s protests.

Rehiring Queiroz has been a controversial move, not because he is not a coach of high pedigree, but because of the manner of the departure of Croatia’s Dragan Skocic.

Skocic had seen brilliant success with Iran, losing just two of 18 games in charge and steering them comfortably to a third consecutive World Cup. But reports of dressing room unrest – particularly with star striker Taremi – put a shadow over him. 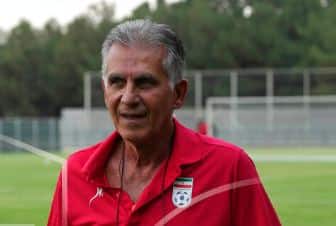 The re-election of former president of Iranian football Mehdi Taj, a security official with the Islamic Revolutionary Guards Corp, sealed Skocic’s fate. Taj came in with Iran’s motive ahead of the World Cup clear. He wanted his own man, and despite murmurings of hiring an Iranian to take on the US, he brought in Queiroz after having done so himself in 2011.

Queiroz’s resume speaks for itself, but Iran’s World Cup run in 2018 will be the one to call back to. Team Melli were on the cusp of their first qualification after a win over Morocco and a draw with Portugal, until Spain’s last-minute equaliser against the former took them to the final 16.

This time around, Queiroz, has even better tools at his disposal to execute his playing style. He likes to keep his teams compact and defend with an emphasis on spaces that cannot be exploited by the opposition, drawing them deeper to hit them on the counter. Organised, but intense.

The central defensive duo of Hossein Kanani and Shoja Khalilzadeh are experienced, and the options in midfield may be limited, but the talismanic presence of Azmoun and Taremi will more than make up for it. In a short while in charge, Queiroz has imposed his blueprint on the team, which saw them get a draw against a talented Uruguayan side last month.

The US and England have both had fractured buildups, and Wales are nowhere near the same team they were when they reached the semifinal at Euro 2016. The opportunity is there for Iran to go further than they ever have. But it’ll also depend on whether the likes of Azmoun hold on to their places in the team despite supporting the anti-government protests.