BHUBANESWAR: Indian men’s hockey team has been pooled alongside England, Spain and Wales in Pool D, as the draw for the 2023 FIH Men’s Hockey World Cup was held here on Thursday.
Ranked world number five, India are the highest-ranked team in their pool.
The group-stage winners will advance straight to the quarterfinals while the teams placed second and third will have to play crossover matches, which will decided their stay in the tournament.
In Pool A, Commonwealth Games champions Australia are clubbed along with Argentina, France and Chile. Pool B includes reigning world champion Belgium, South Korea, fourth-ranked Germany and Japan.
The Netherlands, New Zealand, Malaysia and Chile are placed in Pool C.

While the iconic Kalinga Hockey Stadium in Bhubaneswar hosted the previous edition of the World Cup as well and was lauded world over for its exceptional infrastructure, this time the coveted event will also be held in the heart of Odisha‘s hockey belt, Rourkela, a region famous for its legacy in the sport, having produced numerous international players.
The two venues hosting the January 13 to 29 tournament next year will be the Kalinga Stadium in Bhubaneshwar and the brand new Birsa Munda Stadium in Rourkela.
This is the second consecutive World Cup to be held in India, and fourth overall. 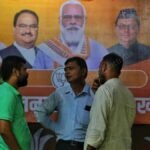