Ashalata Devi is the captain of the Indian national woman’s football team and also leads Gokulam Kerala, who have qualified for the AFC Women’s Club Championship in Tashkent, but are stuck there amid uncertainty over whether they will be allowed to play in the wake of FIFA banning the All India Football Federation. The former AIFF player of the year describes the predicament she and her teammates are facing, and why it’s important for footballers to have a say in how the game is run in the country.

I’ll be honest. In all these years playing football, I have never paid attention to what the federation did, or did not do. I haven’t judged them or thought about their actions. I played football because I derive enjoyment from it. I haven’t played for money or any other motive – anyway, where’s money in Indian football for a woman player!

But now, as I read and listen to all the stories that are coming out, I realise so many bad things have been happening within the federation. Just a couple of days ago, a couple of senior players and I were discussing that we were so busy playing that we did not focus on all the things that were taking place within the federation, which eventually led to India’s suspension from international football.

As a consequence of the ban, our team, Gokulam Kerala, is stuck in Tashkent, Uzbekistan, because the Asian Football Confederation (AFC) has said that we are ineligible to compete in the Asian Women’s Club Championship that begins on Saturday.

The frustrating bit is that we are being punished for no fault of ours. And it’s not the first time such a thing has happened. This incident reminded me immediately of another unfortunate incident that took place in January this year. The Asian Cup was played in Mumbai, Navi Mumbai, and Pune. But after just one match, we were removed from the competition because of a bubble breach that led to a Covid outbreak within our group. 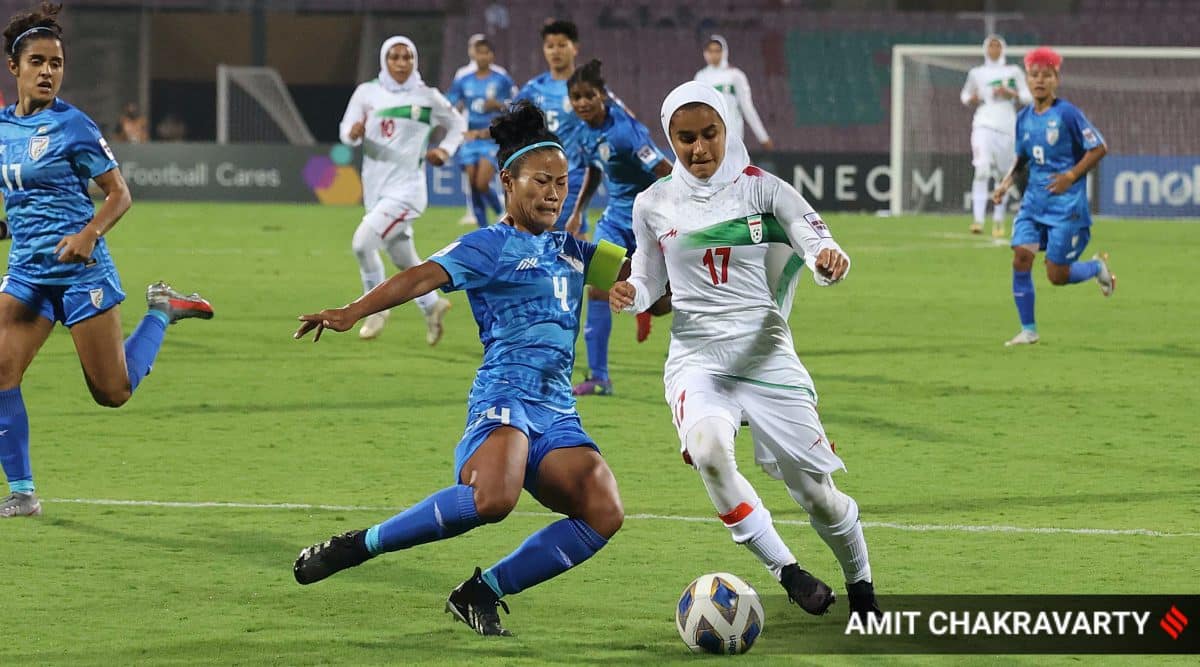 Those were terrible days – we were out of the tournament that was being played in our backyard and none of us players could be with each other since we were all quarantined in a hotel. It was a tough phase emotionally and I was almost on the verge of depression. But somehow, I and others on the team overcame that disappointment and moved on.

There are, however, young players in my club team who haven’t faced a situation like this. There’s a huge amount of uncertainty within our group, and understandably so.

During training, at the dining table and after meetings, many players have been coming up to me with their questions: ‘Asha didi, kya scene hai? Hum khel paenge?’ (Asha didi, what’s the scene? Will we be able to play?’) Every time we meet, this question inevitably pops up. I feel very bad but keep feeding them positive stuff. Remind them that the government is talking to AFC and the club is sparing no efforts to ensure we play. Honestly, I don’t know what is going to happen but as the captain of the team, it’s my responsibility to keep everyone in a positive mindset because if their morale goes down, it’ll create another problem for the team in case we are allowed to play at the last minute.

The good thing is some players are so young that they aren’t on social media yet. So, they aren’t reading everything that’s being said there, which makes the situation a little better to control.

The other big positive thing to happen during this period is my friend and India teammate Manisha Kalyan making her UEFA Champions League debut, becoming the first Indian to do so. In the middle of all the bad news, this came as a breath of fresh air. I watched her play for her club, Cyprus champions Apollon Ladies, and spoke to her after that.

During these difficult times, her feat has motivated us.

How do I keep myself motivated? I have a philosophy. As a defender, if I make a mistake, I don’t dwell on it for long. In a match, I can make 100 clearances and 100 blocks but still, one mistake can lead to a goal. That’s the nature of the game. So, I have trained my mind such that if I make an error, I move on rather than brooding over it. 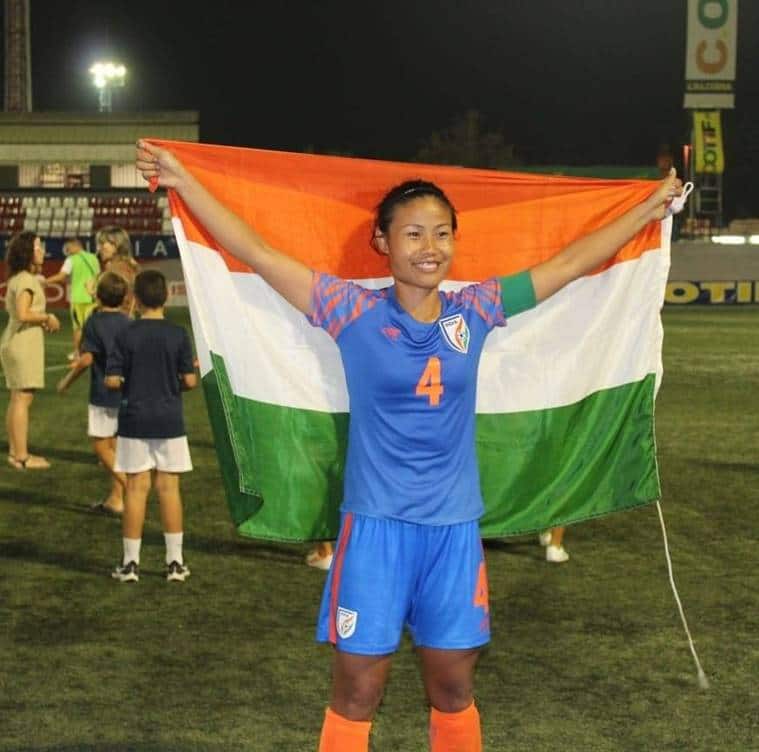 Ashalata Devi is the captain of the Indian national woman’s football team. (Facebook)

That’s how I am handling this situation as well. I know things won’t change no matter how much I think about it since it isn’t in my control. So, I am thinking of different ways to keep myself occupied and move forward – if I am on the ground, I’m training hard. If I’m in my room, I’m working out, strengthening my core and thinking about the game.

The difference, however, is none of this – the suspension and other things that are happening – is the fault of the club or the players, which makes everything very unfair. I see a lot of people saying that this is the fault of just one person – former AIFF president Praful Patel. Some people are alleging his actions in the past have led to this; that he is at fault. There are some others, who are saying he has done good things. My request to everyone is to not get into the blame game now. We need to come up with solutions to ensure the ban is lifted immediately for the betterment of the players, clubs and people of our country. I can’t stress enough the importance of getting the ban lifted soon. The most important thing is the under-17 World Cup. That tournament is important to create an ecosystem for women’s football in the country. Right now, it isn’t professional at all so parents don’t encourage their children to play. The U-17 World Cup will be shown on TV, many people are likely to watch it and it’s a chance to showcase the potential in the women’s game and inspire the next generation.

It’s also important that once the ban is lifted, players get a say in the federation’s decision-making process. I know there is a debate around it but I am not sure what the right formula is – whether it should be 50 percent representation (as suggested by the Committee of Administrators) or 25 percent (FIFA’s recommendation). But right now, there is none. And it’s important to involve players.

We have seen the condition of sports associations – not just in football but in so many others as well – where politicians are in charge. They don’t understand the game and aren’t always sensitive to players’ requirements. So, I hope whoever becomes the next president of the AIFF comes from a footballing background. I feel that dil se. I saw on social media that Bhaichung Bhutia sir is contesting for the president’s post. Just yesterday (Thursday), (goalkeeper) Aditi (Chauhan) and I were talking about it; that if he is elected, it can be a good thing for Indian football. He has been a player and even after retirement, he has been connected with the game. If a footballer becomes president, we can hope that things will change since that person will be able to understand a player’s mindset and requirements.

I am aware that having a sportsperson as an administrator isn’t a guaranteed success. It might not work, for all you know. But they should be given a chance since players have so far not been given a voice.

I am the captain of the national team but have never been consulted for any football-related decisions, even though they impact my team. I have been invited to attend some official functions but never have I been asked what are the needs of the team, or even consulted before a decision is taken.

Hence, if I get a chance, I would like to be a part of the federation, in whatever capacity. As players, it is our right to know who is running our federation, what kind of a person he is, his thoughts, what’s right, and what’s wrong.

All these years as a player, I didn’t pay attention to the goings-on in the federation. But it is our responsibility to be aware of it from now on.