After nine minutes of intense, toe-to-toe brawling that brought everyone inside Hall 4 of Birmingham’s National Exhibition Centre on their feet and left the commentator hailing it as ‘one of the best amateur fights ever’, Ashish Kumar Chaudhary squatted and slapped the floor of the ring in anger. 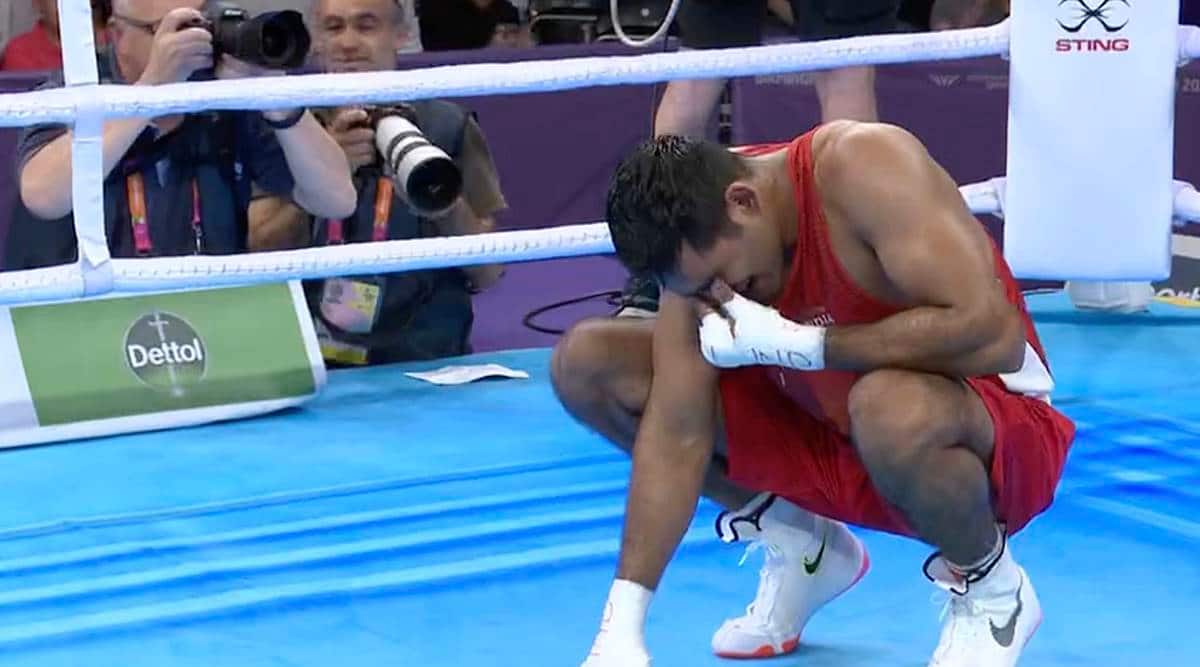 The judges had awarded the light-heavyweight quarterfinal bout, too close for others to call, to home favourite Aaron Bowen. And Chaudhary looked on in stunned disbelief when his opponent’s hand was raised.

More than 12 hours after the bout, the feeling that he had been ‘robbed’ hadn’t left him. He couldn’t sleep the entire night and wondered what the future held – on both, boxing and personal, fronts – as he tried to overcome the pain of a defeat that ‘felt planned’.

“The way the fight went, I thought I had won easily. So, it’s not a nice feeling to be declared the loser. I am disappointed with the scoring,” Chaudhary says, smiling ruefully. “Maybe the judges could not see my punches.”

The scoring of the bout made the final round a winner-takes-all. In the first round, three out of the five judges felt Chaudhary, an Asian championship silver medallist, was better and awarded it to him. The second went to the two-time English champion by the same margin – 3-2.

That meant the boxer who would win the final round would also clinch a place in the semis, and thus be assured of a medal. Neither Chaudhary nor Bowen held back – throwing a flurry of punches at each other, including a closing burst where they traded close-range shots despite the referee repeatedly breaking the flow.

#CWG2022 #Boxing
Ashish Kumar and Aaron Bowen in action during their light heavyweight quarterfinals, in what the commentators described as ‘one of the best amateur bouts ever’. Ashish lost by a split verdict but he received a standing ovation from the crowd.
📹: Sony Liv pic.twitter.com/rPFxJLdpD0

At the end of it, all five judges awarded the round to Bowen, a result that still baffles Chaudhary. “Aisa lag raha hai woh hamara bewakoof uda rahe the ek type se…ki pehle khush kar do aur phir… (It feels like they were making a fool out of me in a way… make him happy first and then…) It felt planned,” he tells The Indian Express from Birmingham.

Chaudhary, who started boxing exactly a decade ago, says he stayed up all night, worrying about what’s next for him. He candidly says that the medal – and the financial rewards that’d follow – would have changed his life. He’d already started dreaming about providing his family with a better place to stay and thought about ‘many other personal goals’.

“So how could I sleep? It was such a big decision. Not just because I lost but also because of the impact it could have on my future. I had been preparing for this moment. Had I won a medal, my future could’ve been settled properly. Suddenly, everything seems to have come to a halt. I will have to start from zero. All this is tough to deal with,” says Chaudhary, the sole breadwinner of his family following his father’s death two years ago. The government has earmarked Rs 30 lakh for an athlete who wins a gold medal at the Commonwealth Games, Rs 20 lakh for silver and Rs 10 lakh for bronze.

Chaudhary, however, expresses frustration at the lack of support from his home state Himachal Pradesh. After he won the silver at the Asian Championships in 2019 – his best result so far – the boxer from Mandi says he went to the state government’s office with the medal and the certificate. “They instead asked me ‘why are you submitting? There’s no use for this as it’s not in our guidelines. It’s a Himachal thing, there’s no support here.’ At times, I regret playing from Himachal.”

Chaudhary isn’t shy to admit that money, other than medals, is a motivation. “Whatever you think, it’s about money for a sportsman. That’s the only way we can realise our dreams. So, this medal was my last hope to help my family live a better life,” he says. “Now, I am stuck from all sides.”

The standing ovation and being a part of ‘one of the best amateur fights ever’ is little consolation.

‘He’d Box My Face And Punch My Private Parts’: Flora Saini Recalls Abusive Relationship With A

Pakistan will not have any trouble playing on Indian pitches at the World Cup: Aaqib Javed

The Case of Khadar Valli Dudekula – The Wire Science

There Are Good Reasons for Hope – The Wire Science

Is ‘Toadzilla’ a Sign of Enormous Cane Toads To Come? – The Wire Science