The days of play-acting with raised balled fists whenever a photographer demanded he strike a boxing pose, are over for Amit Panghal. It was never his personality in the first place to showboat. Or show off the knuckles that he prefers to bare like fangs only in the ring, and when encased in gloves. The ability to say ‘No’ to brandish a punch-on-demand, is just one of the things that maturity has brought into the armyman.

The loss to the Columbian Yeburjen Martinez at the Olympics, after allowing him to get into his head at the sparring camp at Italy prior to the Games, fundamentally changed something in Panghal. Introverted and highly reserved with anyone outside his circle, he still remains. But inside the ring, his early reticence where he would run around – and away – in the opening round, and then attempt comebacks in the second and third, has made way for more proactive punching up front. Even if he absorbed an essential recce of an opener where he gauged just how much of the Scot was a blathering bluster and how much genuinely blinding blitzes that could pose him trouble later.

He might still start with his guard defensively up like against the wild-punch scattering Scott Lennon Mulligan in the quarters to book a sure medal, but he covers ground well, and even the counter-attacks come laced with an intent that screams, he’s calling the shots. Moreover, there’s confidence in every punch he throws backed by assured footwork, and an enhanced sense of anticipation, as he went past the first target of making the semis with a unanimous decision.

Panghal had spent the first two months post the Tokyo shocker, barely debriefing even with his early coach in Rohtak, Anil Dhankar. He would just sit in front of the coach, and both would break down into tears, according to Dhankar.

The coach’s recipe to bounce back was to improve as an ‘athlete’, not merely as a boxer. “Khiladi banna hoga. Bas boxer nahi,” he would say, of going back to basics. 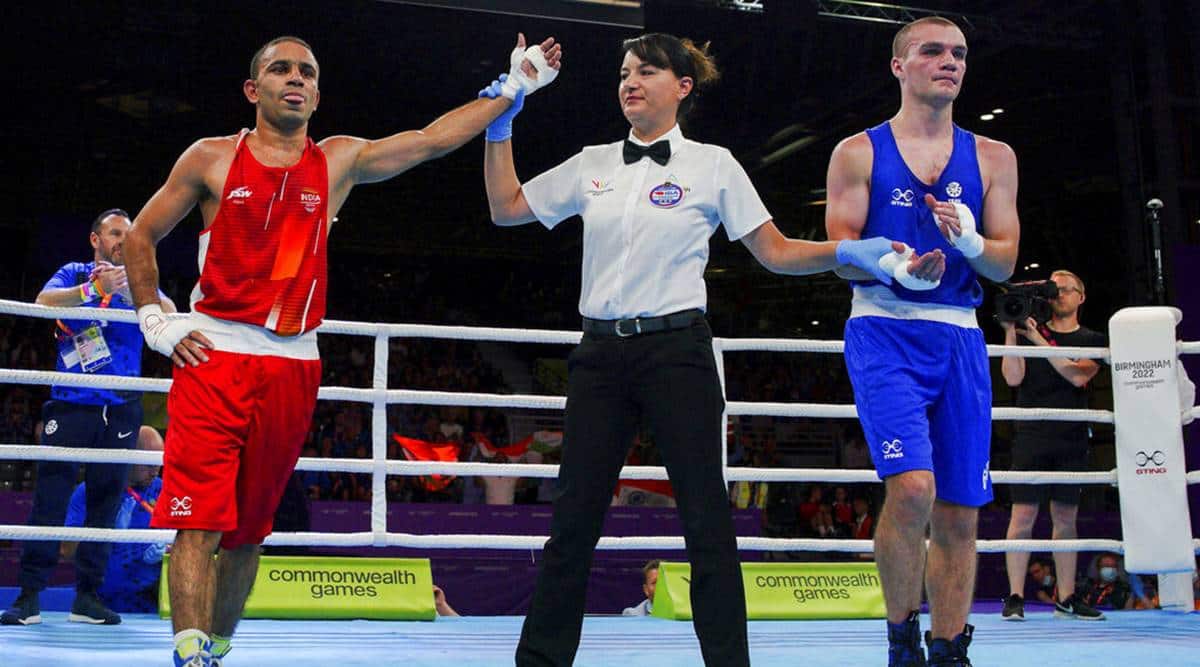 Amit Panghal, left, and Scotland’s Lennon Mulligan in the Men’s Fly (48-51kg) quarterfinal during the Commonwealth Games at The NEC, Birmingham, England. (AP)

So, Panghal would hop over to local athletics coach, Rajesh, who trains Rohtak youth in throws – discus and shotput, to inculcate the thrower’s workouts. At Tokyo, Panghal had frozen. But there were deeper issues – his punches lacked sting and the ideal range was compromised as a result. Training with the shotput specialist for a month and some, helped build explosive strength in his forearms. Like against Mulligan through the length of nine minutes, Panghal wouldn’t back-pedal, as the pithy punches yielded returns.

Panghal’s usual monotone of a game style, has also broadened to include variations unlike the last CWG, though 2018 is considered his peak. There were punches to the opponents’ whole body on Thursday, the torso coming in for some pummelling, and the sides receiving his pinging attacks before he would go elusive to his opponent with a side guard. The plan was fight & flight, strike and bike away, hit and move. In forcing Mulligan to flee, Panghal also asserted he was the boss, when the bout paused.

As one of India’s biggest hopes in men’s boxing – India doesn’t have a medal in men post Vijender in 2008 – Panghal had been under tremendous pressure, and wilted right under it. Demoralised, he would go into an even quieter shell than one he inhabited with the outer world. It wasn’t just returning empty from the Olympics, it was the shelf-life of a smaller boxer, with sell-by dates in bold-underlined. Smaller weight divisions in boxing are notorious for their turnovers, and attritions – as top countries keep churning out new personnel to man the 51 kg, and hunt for medals. When India’s men’s boxing campaign got off disastrously at Tokyo, the dismaying exits rubbed off on Panghal, as if the pre-Games blows in Italy from the Cuban weren’t scalding enough. He was literally buzzed into inactivity in the ring – his listlessness coming as a shock for those who watched. The change of gears never happened.

At the 2018 Asiad, Panghal had hung out with the likes of Neeraj Chopra and Bajrang Punia, and carried over from India’s handball win over Pakistan. At Tokyo, Panghal was alone with his thoughts, when the Cuban went off on a relentless mad barrage, and literally kept bullying Panghal about.

At Birmingham, Panghal has settled into a smooth training rhythm with coaches, he isn’t angsty about wanting his personal coach, as he’s coming in with some satisfactory ring-craft sessions with national coaches. Plus, his best buddy, Sanjeet, also a forces bloke, managed to qualify as well and is with him at Birmingham.

The 51 kg – 91 kg Rohtak-duo are an odd pair of friends, but get along like a house on fire and it helps to move around in reassuring company of friends for meals and in the Village. Quick to strike fraternal bondings given both hail from the same place and trained under the same coach, Sanjeet offers Panghal the outlet for rougher days when he typically cocoons himself, though he remains the same chattery person when around friends.

The pizza-pasta options in Italy prior to the Olympics had also frustrated the boxers, but here they have settled into a good routine. The CWG was also something for Panghal to look forward to, after the highs of making the World’s finals in the last Olympic cycle. On Thursday, Panghal would reiterate he was going for gold, in the few words he spoke. He would save the punchlines for when / if the gold comes, and the punches for lording in the ring. No fighter worth his salt, beams for cameras when the wrist is raised for a punch in the ring. Panghal’s weapons remain sheathed till the opponent fetches up.

‘He’d Box My Face And Punch My Private Parts’: Flora Saini Recalls Abusive Relationship With A

Would rather sit in opposition than dilute our core demands, says TIPRA chief Pradyot Debbarma

This is just the beginning, says Shafali Verma after U-19 WC triumph

The Case of Khadar Valli Dudekula – The Wire Science

There Are Good Reasons for Hope – The Wire Science

Is ‘Toadzilla’ a Sign of Enormous Cane Toads To Come? – The Wire Science