Soon after the Tokyo Olympics, Avinash Sable was home. In Mandva, a village in the arid Beed district, India’s best distance runner started working on a farm. He had broken the 3000-metre steeplechase national record again at the Summer Games. But not qualifying for the final was a disappointment he could not overcome, Sable says. Initially, he didn’t want to travel to the Olympics, because after testing positive for Covid, he was drained. The legs had felt heavy-laden when he trained. Sable rewinds to pre-and-post Olympic days.

“After the Olympics, I stayed home. I did some farming. I could not do well because I had Covid. I had lots of weaknesses. I felt I could not even run 8:30 (8 minutes and 30 seconds). At one point I thought that I would pull out of the Olympics but sir (coaches) told me that it is important to run in the Olympics. If you get a chance, why not take it. I was not confident of doing well at the Olympics. I was disappointed,” Sable says from his training centre in Colorado Springs, USA.

He didn’t train for nearly three months. Just going for a jog seemed like a herculean task. Sable’s family was worried he was turning into a recluse. “People at home used to ask why are you becoming a loner. I used to be on the fields the whole day. I wanted to start practice, but it took time,” Sable says.

By October, when the national camp commenced, Sable was bitten by the running bug again, although it took him a while to hit his stride. At the Indian Grand Prix at Thiruvananthapuram in March — his first race since the Olympics — he rewrote his national record again for the seventh time. It was humid during the race yet Sable overcame the conditions to go faster than he had before. “At the Grand Prix when I ran 8:16 (8:16.21). I felt better. If I could run in Trivandrum in the humidity. I thought I could take a risk.”

Sable has been reluctant to be at a foreign training base. A few years ago when the late Nikolai Snesarev was ready with a detailed plan to train abroad, Sable pulled out. Coach Snesarev had rated Sable highly but was upset when Sable was disinterested in stepping out of his comfort zone.

“Nobody worked as hard as him (Snesarev) as a coach. He had planned a foreign camp, but I made a big mistake by not going outside. I didn’t take any risk. He got angry and he didn’t come back.” Even before the Olympics, the Athletics Federation of India had chalked out a plan for him to move abroad. Sable was reluctant. 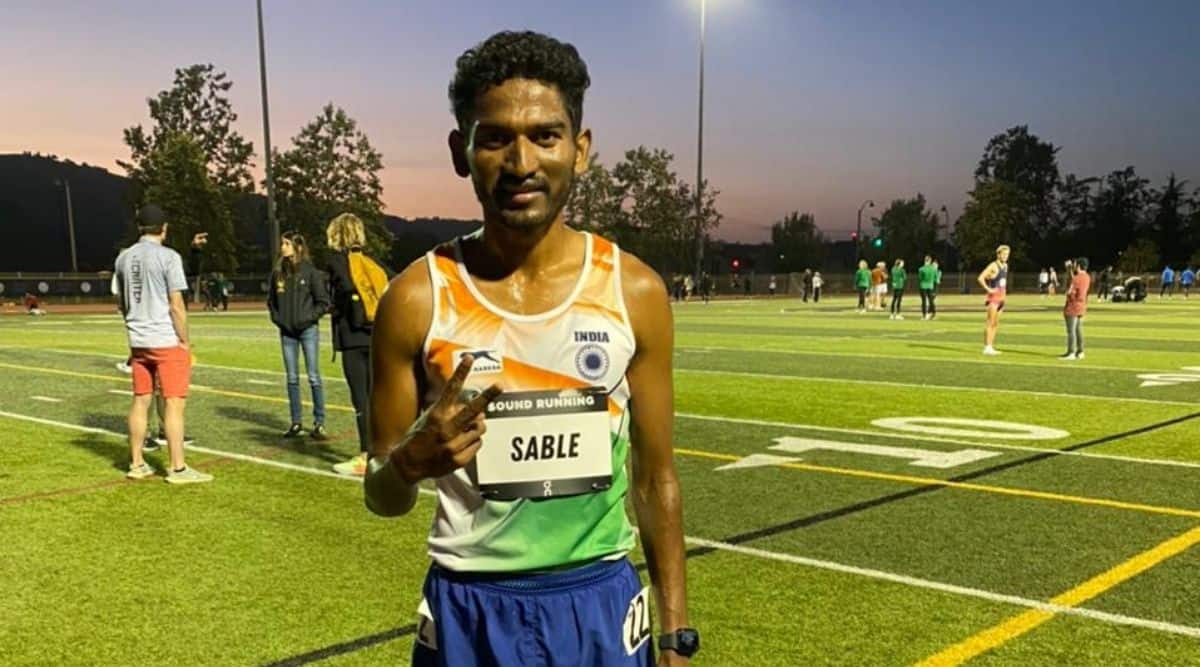 “Maybe earlier if I had trained with these (foreign) athletes I could have got a better result in Tokyo,” Sable says. Now Sable has not only embraced ‘risk’ by training in Colorado Springs, but he has also embraced a training method aimed at making him lightning quick in the final 400 metres of the 3000m steeplechase. The colder climes near the Rocky Mountains didn’t deter him.

When distance coach Scott Simmons first met Sable in Bengaluru in March, the purpose was to break the ice. He also wanted to ask Sable if he was ready to rework his training programme if he travels to Colorado Springs. “He seemed to be ready,” Simmons says.

A fast kick in the final 400 metres was a focus. Some of the best in the world can complete the last quartermile in 53-54 seconds. Sable can be just as fast. Maybe not at this week’s World Championships, but soon. “He can do a sub-60 (seconds) in the finish, the last 400 metres. He is capable of even 56 seconds. That would mean he would be very fast over the hurdles too, including the water jump. The key is to finish fast if he is aiming for a medal (at the major championships). He will break the national record again, but he is capable of doing much more in terms of a medal,” Simmons says.

Interval training — low and high intensity running — involving 400-metre runs done up to 16 times at a stretch, is one of the routines Sable uses to get faster in the final part of the steeplechase. He has to scale over four hurdles if he is running 400 metres. For a 200-metre run, it is two hurdles.

“His speed is pretty exceptional,” coach Simmons says. “He is also extremely tough. He has fallen, got up and competed again. He has strong bones. In training he is disciplined.”

Bettering his speed in the home stretch will need Sable to glide over the water hurdle instead of stepping on it. Athletes use the hurdle to push themselves beyond the water pit which lies ahead hence reducing the chances of injury. But a fraction of a second is lost when the running shoes make an impact with the hurdle. By not stepping on it, runners can go faster but need to time their jump perfectly and have ideal momentum while approaching the hurdle. “His efficiency over the hurdles is commendable,” Simmons says, giving Sable a vote of confidence. Last month in Rabat during the Diamond League, Sable broke the national record again – the eighth time he has done so. His time of 8:12.48 is the 12th fastest in the world this year. Those above him include four outright favourites at the World Championships. Morocco’s Soufiane El Bakkali, Ethiopia’s Lamecha Girma and the two Kenyans Conseslus Kipruto and Benjamin Kigen. Historically, the Kenyans have been the strongest at the steeplechase at the World Championships. But El Bakkali is the one to beat. At the Diamond League in Rabat, when Sable finished fifth, El Bakkali won the gold with the current world-leading time of 7:58.28.

Sable says being part of the same race as some of the best has helped him access where he stands. unlike in competitions in India where he usually leads from start to finish. “My first Diamond League (Rabat) was a great experience. I feel if I compete against the best in the world, I will improve. You learn how the best runners slow down, how they decide to go fast in a race,” Sable says. ” In India, I run on my own and I run ahead. But in steeplechase, there is always a crowd (on track) and in international races, you get to learn a lot.” Sable believes a sub-8-minute race from him is a possibility. He measures how much faster he can go by looking back at how much slower he used to be.

“In 2018 I ran 8:30 and at that time I never thought I would run 8:12. I don’t think sub-8 will be tough. In India, we think that foreign athletes have different genes and we can’t beat them. When I train with them, I don’t think we are lesser athletes. We don’t get enough opportunities (to compete against them). In India, four years ago, if you ran below 8:50 then we used to think that we did very well.

Even if one ran 9 minutes, you could get a bronze in the steeplechase. At that time I just wanted a promotion (he is an army man) after winning a national medal. I just wanted to finish in the top three. But from aiming to run in nine minutes I have come to 8:12. So now a sub-eight minutes, I would say, is not easy but it is not tough either.”

If he feels a hint of nerves when competing against the top athletes, Sable thinks of his days as a soldier in the army. He has been posted in Siachen in freezing temperatures and also in extremely hot places like Lalgarh Jatta.

“I started running when I was in the army only. So that has helped me a lot. I can live in any kind of situation. Running (on a track) is easy. If you are running 5 kilometres BPT (battle proficiency test) in army training, then you have to carry a weapon and then there is a bag on your back which is also heavy. This is damn easy. I love running,” he said.

Mumbai Confidential: For A Clear Skyline

Urge US not encourage groups meddling in internal affairs of India: Diaspora body writes to Jaishankar

‘When Surya started hitting, I looked at the dug-out. Rohit & Rahul bhai said, you can just keep batting on,’ Virat Kohli says after a 48-ball 63

In Conversation Efforts, the Tiger Overshadows India’s Other Carnivores – The Wire Science

Should Scientific Journals Take a Political Stand? – The Wire Science

Environmental Violence Is Rife in West Bengal – The Wire Science