The initial reaction was a wrenchingly hollow sense of an emptiness that felt like it had been coming for a while – the gnawing feeling that some lives are almost destined to remain unfulfilled. Then came the first thought. How fast was Andrew Symonds going?

Surely it had to be nothing but breathtakingly fast, the only way he seemed to operate, whether at the wheel of a car or at the crease or in life. It was the same daredevil combination of thrill and foreboding he gave when he hunched somewhat awkwardly into that stance, the bat appearing too small in his massive gloves. It was as if the casual, rapid tapping of the bat in the crease was telling the bowler to just get on with it, as he did not have too much time for the frivolity of a long run-up. For he just wanted to uncoil in deceptively quick fashion from that ungainly stance and bash the ball as hard as he could before he could wind down with a drink or three in the evening.

That, essentially, was what he did best in an international career that stretched over a decade but was cut short just before he was to turn 34. His style was both brutal and beautiful in a manner that was almost primal, and even if you were rooting for the opposition and willing him to get out every next ball, you just couldn’t take your eyes off him. He was ahead of the curve in the limited-overs game, and way ahead of his time in T20, where even today, more than a decade after he played his last game, his international strike-rate of almost 170 remains eye-popping.

It won’t be unfair to say that for most Indian cricket fans in 2008, Symonds was one of the starring villains of the Monkeygate controversy, if not the most central figure at the heart of one of the game’s biggest scandals. And yet, as it turned out, he became, more and more, the central victim of its fallout. A few years later, Ricky Ponting would say that the incident and its aftermath had finished Symonds’ career. He lost trust in those who were supposed to stand by him, and no matter how strong you may appear to the world from the outside, being let down when you are at your most vulnerable can break the very best.

Villain or victim? That could well be the question that defined Symonds, and how the world perceived him. It was hard to remain perched on the fence when it came to him. Out fishing when he was supposed to be at a team meeting. Drinking in public during a T20 World Cup, that too in England, when he had promised he wouldn’t. Calling Brendon McCullum a lump of shit in a radio interview. 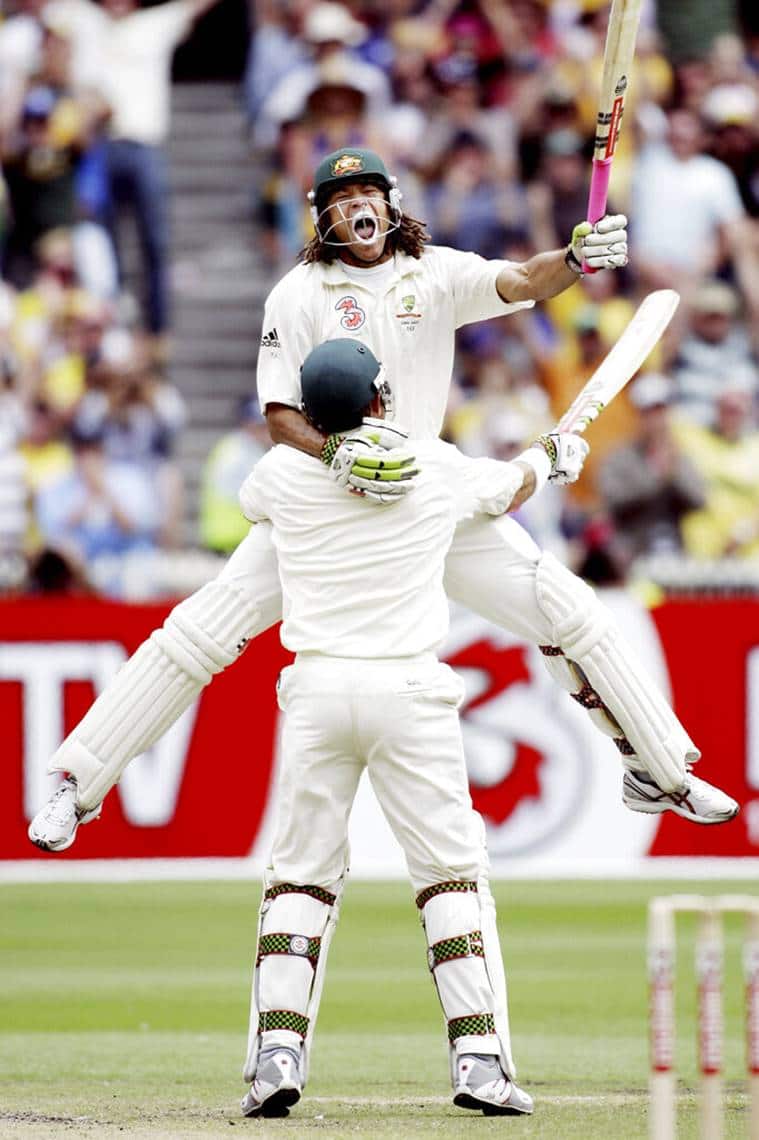 Australia’s Andrew Symonds, back, jumps into the arms of his batting partner Matthew Hayden after Symonds made 100 runs against England at the Melbourne Cricket Ground in Melbourne, Australia on Dec. 27, 2006. (AP Photo, File)

And then he would walk in at 84 for 5 in a Boxing Day Ashes Test at the Melbourne Cricket Ground and bash an immortal 156 against the country of his birth. Or come in at 86 for 4 in a World Cup and crack 143 not out in 125 balls against Wasim Akram, Waqar Younis and Shoaib Akhtar. It gives you a sense of what he was capable of if he could play almost 200 ODIs and still the consensus would remain that justice hadn’t been fully done to the rare talent he possessed.

On the other hand, the bar brawls and the binge drinking would never quite go away. “I go out and drink hard all in one hit. Too fast, too much,” he’d said once. He was right. The rollercoaster he was on was going too fast, too much. All along, it had felt like something had to give. That it did at the age of just 46 adds the final full stop to a lifetime of sudden starts-and-stops. And it is probably fitting that he played his last match in India for an Indian team, Mumbai Indians, against an Australian team, New South Wales, in the 2011 Champions League. The villain and victim were both somehow conjoined to this land.

Pakistan: Christian Man Who Said ‘Jesus Is Supreme’ Gets Death Sentence For ‘Blasphemy’

We will review why batters are failing in 3rd innings of Test matches: Rahul Dravid

OnePlus-Vijay Sales partnership expands: This is what it means for buyers – Times of India