The Indian women’s team will play two international friendly matches — against Egypt and Jordan — in April, the All India Football Federation said on Monday.

The matches will be played in Jordan on April 5 (against Egypt) and 8 (against Jordan).

“The senior women’s national team will be playing Egypt and Jordan in two friendly matches, both of which are to be played in Jordan from April 5-8, 2022,” the AIFF said in a release.

“The Blue Tigresses will thereafter, be joining their respective clubs for the upcoming Hero IWL season.”

The training camp of the 30-member Indian squad under head coach Thomas Dennerby began in Goa on Monday. The team will leave for Jordan on Saturday.

Dennerby was with the national U-18 team which won the SAFF Championships in Jamshedpur last week. Astam Oraon, Apurna Narzary and Martina Thokchom of the U-18 side have joined the senior national camp.

The national side was forced to withdraw from the group stage of the AFC Asian Cup which India hosted in January-February after it failed to field a team due to COVID-19 outbreak inside its bio-bubble in Mumbai. 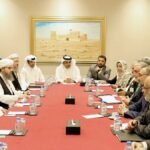 PM Modi’s Independence Day Speech: ‘National Education Policy will give people the strength to be free from slavery’