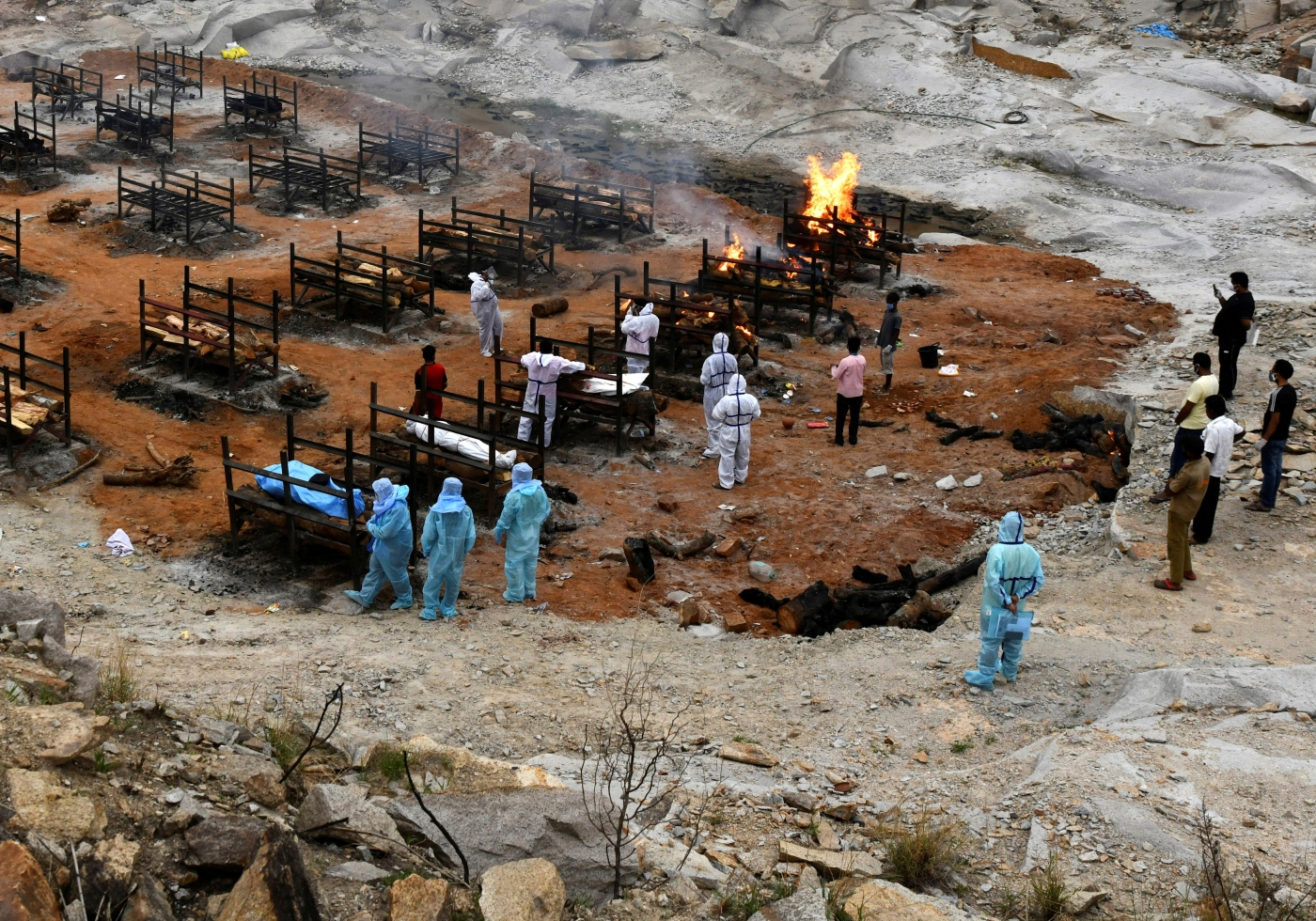 Relatives prepare to cremate the bodies of persons who died due to COVID-19, at a crematorium in Giddenahalli, Karnataka, May 2, 2021. Photo: Reuters/Samuel Rajkumar

New Delhi/Mumbai: India postponed exams for trainee doctors and nurses on Monday, freeing them up to fight the world’s biggest surge in coronavirus infections, as the health system crumbles under the weight of new cases and hospitals run out of beds and oxygen.

The total number of infections so far rose to just short of 20 million, propelled by a twelfth straight day of more than 300,000 new cases in a pandemic sparked by a virus first identified in central China at the end of 2019.

Medical experts say actual numbers in India could be five to 10-times higher than those reported.

Hospitals have filled to capacity, supplies of medical oxygen have run short, and morgues and crematoriums have been overloaded with corpses. Patients are dying on hospital beds, in ambulances and in carparks outside.

“Every time we have to struggle to get our quota of our oxygen cylinders,” said B.H. Narayan Rao, a district official in the southern town of Chamarajanagar, where 24 COVID-19 patients died, some from a suspected shortage of oxygen supplies.

“It’s a day-to-day fight,” added Rao, as he described the hectic scramble for supplies.

In many cases, volunteer groups have come to the rescue.

Outside a temple in the capital, New Delhi, Sikh volunteers were providing oxygen to patients lying on benches inside makeshift tents, hooked up to a giant cylinder. Every 20 minutes or so, a new patient came in.

“No one should die because of a lack of oxygen. It’s a small thing otherwise, but nowadays, it is the one thing every one needs,” Gurpreet Singh Rummy, who runs the service, told Reuters.

Total infections since the start of the pandemic have reached 19.93 million in India, swelled by 368,147 new cases over the past 24 hours, while the death toll rose by 3,417 to 218,959, health ministry data showed. At least 3.4 million people are currently being treated.

Offering a glimmer of hope, the health ministry said positive cases relative to the number of tests fell on Monday for the first time since at least April 15.

Modelling by a team of government advisers shows coronavirus cases could peak by Wednesday this week, a few days earlier than a previous estimate, since the virus has spread faster than expected.

At least 11 states and regions have ordered curbs on movement to stem infections, but Prime Minister Narendra Modi’s government, widely criticised for allowing the crisis to spin out of control, is reluctant to announce a national lockdown, concerned about the economic impact.

“In my opinion, only a national stay at home order and declaring medical emergency will help to address the current healthcare needs,” Bhramar Mukherjee, an epidemiologist with the University of Michigan, said on Twitter.

As medical facilities near breaking point, the government postponed an exam for doctors and nurses to allow some to join the COVID-19 frontline alongside existing personnel, it said in a statement.

In Pune, the second-largest city in Maharashtra, Dr Mekund Penurkar returned to work just days after losing his father to COVID-19. His mother and brother are in hospital with the virus, but patients are waiting to see him.

“It is a very difficult situation,” he said. “Because I have been through such a situation myself, I can’t leave other patients to their fate.”

Modi has been criticised for not moving sooner to limit the spread and for letting millions of largely unmasked people attend religious festivals and crowded political rallies in five states during March and April.

In early March, a forum of government scientific advisers warned officials of a new and more contagious variant of the novel coronavirus taking hold. Despite the warning, four of the scientists said the Union government did not seek to impose major curbs.

With the next general election due in 2024, it remains to be seen how the pandemic might affect him or his party. His Hindu nationalist party was defeated on Sunday in a state poll in the eastern state of West Bengal, although it won in the neighbouring state of Assam.

Leaders of 13 opposition parties urged Modi in a letter on Sunday to immediately launch free national vaccinations and to prioritise oxygen supplies to hospitals and health centres.

Despite being the world’s biggest producer of vaccines, India does not have enough for itself. Just 9% of a population of 1.35 billion has received a dose.

Daily shots have fallen sharply from an all-time high reached early last month as domestic companies struggle to boost supplies. Vaccination centres in Mumbai were deserted after the state government said it did not have enough supplies to administer second doses for adults above 45.

Only limited doses were available for those aged 18-44 and no walk-ins were allowed.

India has struggled to increase capacity beyond 80 million doses a month due to a lack of raw materials and a fire at the Serum Institute, which makes the AstraZeneca vaccine.

Another manufacturer, Pfizer Inc, is in talks with the government for “expedited approval” of its vaccine, Chief Executive Albert Bourla said on LinkedIn, announcing a donation of medicines worth more than $70 million.

Last month, India said its drugs regulator would hand down a decision within three days on emergency-use applications for foreign vaccines, including that of Pfizer.

International aid has poured in in response to the crisis.

Britain will send another 1,000 ventilators to India, the government said on Sunday. Prime ministers Boris Johnson and Modi are set to talk on Tuesday.

The B.1.617 COVID-19 variant has now reached at least 17 countries including Britain, Iran and Switzerland, spurring several nations to close their borders to travellers from India.