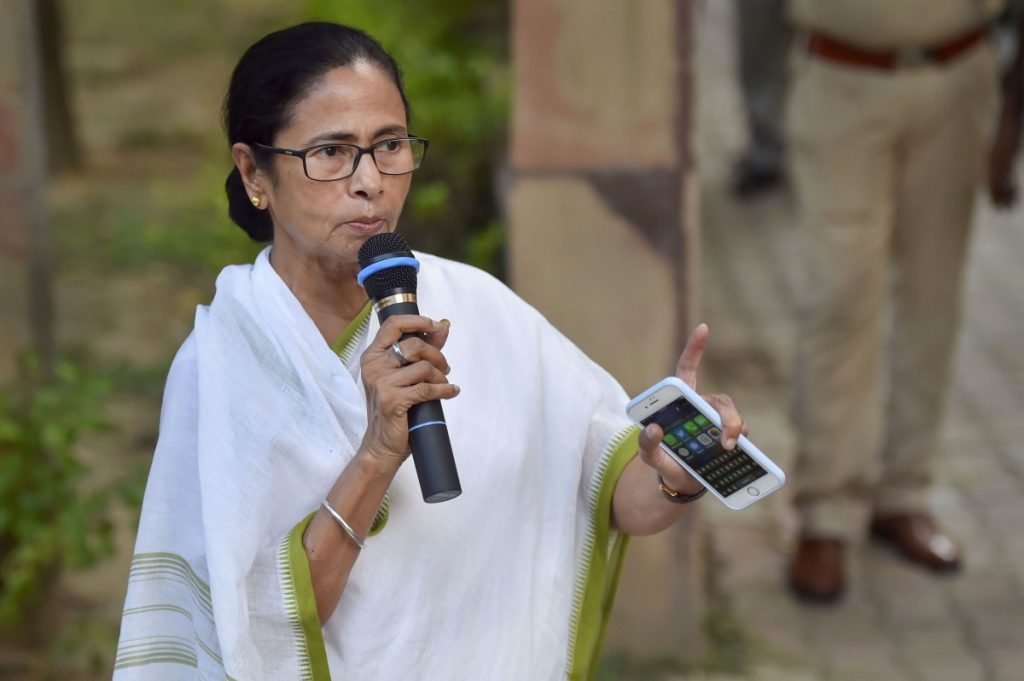 Before the first ‘March for Science’ took place on April 22, 2017, in Washington, DC, and nearly 600 cities around the world, a fierce debate raged among scientists. One group said science should not be political; the other said colonialism, racism, immigration, native rights and economic justice are also scientific issues.

The idea of a march for science emerged from the Donald Trump administration’s climate change denial, and continuous budget cuts for science. Both had serious implications for the planet’s wellbeing and for the people of science.

About a month ago, I commented on a social media platform that the assembly elections in a few states, including West Bengal, will have a bearing on education in general and science and technology in particular – and all hell broke loose. I was trolled for “unnecessarily” bringing politics into academics.

A few of my students, some from outside Bengal and others from abroad, wrote to me asking why the Bharatiya Janata Party’s ascent shouldn’t further the cause of making an economically and militarily powerful India. Several were of the view that Bengal in particular is a failed state.

I am not a fan of institute rankings and not euphoric that in 2021, Calcutta University was ranked number 1 by the Academic Ranking of World Universities. I am also not enthusiastic about indications that the number of universities in Bengal increased from 12 to 46 between 2011 and 2021, or that Bengal is among the top six states in terms of total student enrolment in higher education.

What concerns me more is how much any government is investing in education in general. Although West Bengal has the sixth highest GDP among India’s states (Rs 14.70 lakh crore), its high population density means it is indeed a poor state, with a per capita GDP of only about Rs 1.2 lakh. But in recent years, it has increased its school education expenditure as a share of the total state budget, from 12% to 17%

In the same time, it allocated nearly 51% of its education expenditure to secondary education, higher than even rich states like Maharashtra. Like all other states in India, most of this expense was borne by the state. Only about 17%  came from centrally sponsored schemes like Sarba Siksha Abhiyan. West Bengal also spent the highest (12%) of this expenditure for incentives to students like uniforms, text books and midday meals.

An offshoot of this is the Kanyashree Prakalpa, a state government initiative that provides cash incentives to economically backward girl students who otherwise can’t study and are forced to get married before they turn 18. In 2017, the UN honoured this scheme with a public service award – one among 552 social sector schemes in 62 countries.

Of course, none of this is to say that everything in Bengal’s education sector has been or is hunky dory. The 2018 report of Amartya Sen’s Pratichi trust, entitled ‘Primary Education in West Bengal’, writes that in spite of remarkable improvement in the average pupil-teacher ratio of 23:1 over the last decade, there is an acute shortage of teachers in 20% of schools. The number of single-teacher schools has increased to 4%. A not insubstantial number of schools remain short on funds, teachers’ training and academic planning.

I work in the higher education sector. Away from these statistics, what gratifies me is that the science and liberal arts students from Bengal can be found in many of India’s better academic institutions. I remember when the director of one of the IITs said at a freshers’ welcome a few years ago: “So many students from Bengal! It looks like a college in Bengal.” The same thing is likely to be true in physics and economics centres.

The fact is that unless undergraduate colleges and universities have access to a minimum and good quality of teaching, the state wouldn’t be able to consistently produce so many good students. With all its decadence during Left rule or during the Trinamool Congress’s previous tenure, all is not lost in Bengal – far from it, in fact.

Statistics pertaining to the health sector allow us to reach similar conclusions on that front. During the recent electoral campaigns, both the BJP and the Left constantly mocked the state’s Swasthya Sathi programme as a gimmick. The programme aims for basic health cover for secondary and tertiary care up to Rs 5 lakh per year per family. We will be able to truly gauge the success of this programme in a few years, so the criticism seemed premature.

I am hopeful, however. I saw a sub-divisional hospital in Kharagpur, which used to be very dirty and malodorous a few years ago, that today looks cleaner and with a reasonable number of doctors.

According to a Union health ministry report, the number of government doctors per lakh population in Bengal is 9, about the same as Gujarat (which is wealthier and less densely populated) and not very good. But the neonatal mortality rate in Bengal is one of the lowest in India, while the total fertility rate – an indicator of education, female labour participation, widespread birth control use and longer lifespan – is a sound 1.6.

Taken together, these indicators in education and health may not be comparable to, say, those of Kerala, but they suggest calling Bengal a “failed state” is misguided.

The BJP kept saying or implying this during the course of its campaign and it has misfired.

Given the recent election results in the state, overwhelmingly in favour of Trinamool and against the BJP, it may be worthwhile to examine the Centre’s performance in the last decade vis-à-vis education and health.

The Central government’s expenditure on education crashed from 0.6% of GDP in 2014 to 0.45% in 2020. This brought the total combined Centre and state expenditure down from 3.19% to 2.88%. The new education policy acknowledges that it should have been at least 6%, as the Kothari commission envisaged in 1966 itself.

The investment in higher education in particular has also been dismal. The Indian government cut Rs 1,000 crore in the 2020-2021 Union budget after the education sector had been badly hit by the pandemic and needed a stimulant. The Centre’s spending on R&D has been stagnating at 0.7% of GDP, compared to 2.8% in the US and 2.1% in China. With such paltry sums, India becoming the ‘Vishwaguru’ of anything related to science will remain a pipe dream.

In 2018, the government discontinued budget grants for improving infrastructure at IITs institutes and created a Higher Education Funding Agency (HEFA) to provide loans to educational institutes at competitive rates. Any loan was to be returned in principle – but no one knows what might happen if after 10 or 20 years the IITs and other central institutes are saddled with debt. Will these institutes be privatised then, like what we’re already seeing in parts of the education and healthcare sectors?

The 2021 budget cut no less than 91% of the Centre’s HEFA allocation until then, rendering it virtually defunct.

While investment in education seems derisory, the one in public healthcare is abysmal. India’s per capita health expenditure is only Rs 1,944, and it has been ranked 144 out of 200 countries on the quality and access of healthcare. The Centre’s budgetary allocation remains at a trivial 0.3% of the GDP and there have been no signs that there could be a big jump in future.

In 2018 alone, 38 million Indians were pushed below the poverty line by out-of-pocket expenses on medical care and medicines. During the second wave of COVID-19, this deep wound has been rendered deeper, with the public healthcare system collapsing in very visible ways. But the government didn’t act to improve India’s healthcare infrastructure nor made any concrete plans to prebook sufficient doses of COVID-19 vaccines to inoculate at least 75% of its population.

Today, we confront a vaccine shortage in all states. I know of one senior citizen who had to stand in a queue from 5 am to ensure he got his dose that day.

India’s education or healthcare systems have continuously deteriorated over the last 10 years, for reasons we can all agree are true: systemic failure on the political leadership’s part, assisted by central planners and administrators, including scientists at the helm. The latter’s silence on state-sponsored pseudoscience in particular is grating; their passivity has substantially damaged India’s scientific temper during the pandemic.

These ‘experts’ have in fact kept mum on the many, many utterances of pseudoscientific nonsense by ministers and officials of the ruling party. So maybe it is not surprising that their silence simply continued when the Centre said India had “defeated” COVID-19 and raised no objections when the leadership openly flouted safety norms.

The suppression of sane and rational voices has been India’s ‘normal’ for sometime now, with a noticeable reluctance among members of academic and scientific communities to comment on public matters and withdraw further into the bubbles the government has set up for them.

In 2011, I wrote for Ananda Bazar Patrika about how the regimented Left government had destroyed Bengal’s historical seat of learning, the Presidency College (now a university). I think we can consider the latest West Bengal poll result coming after a decade of the Left’s toppling (even if the dates are a coincidence) to be a rejection of attempts to regiment the state’s liberal, rational and scientific minds.

Mamata Banerjee isn’t exactly a champion of science; India’s politicians rarely are. But it’s not hard to imagine the demands of trying to reconcile the state’s liberal tendencies with the BJP’s regressive ideologies on the ground.

During the US presidential election last year, the journal Nature openly supported Joe Biden’s candidature – a first in its 150-year history. In an October editorial, its editors wrote:

“The Trump administration’s disregard for … science, institutions of democracy and, ultimately, facts and the truth have been on full display in its disastrous response to the COVID-19 pandemic. Trump has also promoted nationalism, isolationism and xenophobia – including tacitly supporting white-supremacist groups… We cannot stand by and let science be undermined. Joe Biden’s trust in truth, evidence, science and democracy make him the only choice in the US election”.

In India as well, scientists and academicians must speak up, advocating for a governance that puts reason, democracy and accountability first, and a government that isn’t obsessed with a cult of personality, either of one man or of the country itself. COVID-19 has our undivided attention at the moment, and once it passes, we must all join the long march for better education and health.

Anindya Sarkar is a professor of geology and head of the National Mass Spectrometry facility, at IIT Kharagpur.