Shillong: The Meghalaya government on Tuesday withdrew its earlier order that allowed religious places to reopen doors to devotees from June 14, and said congregations of any kind would have to be avoided for the time being, given the unrelenting rise in COVID-19 cases.

The state government had earlier drafted safety protocols, and said churches and other places of worship in the Christian-dominated state would be given permission to resume normal services from June 14, provided they abide by the guidelines.

“We have withdrawn our previous order allowing places of worships to open, in view of the spike in COVID-19 cases in the state,” Deputy Chief Minister Prestone Tynsong told PTI.

Earlier in the day, Chief Minister Conrad K Sangma met the top religious leaders in the state to discuss the matter.

“Based on consultations with different religious organisations this afternoon, the Govt has decided to put on hold the reopening of religious institutions in #Meghalaya that was previously decided for the 14th of June,” he tweeted.

Four new coronavirus cases have been detected in the state since Monday, increasing the tally to 40 — three times of what it was during the second week of May.

Many churches have issued statements, contending that they were not keen on opening the doors anytime soon, as it could expose people to the risk of virus transmission.

Also read: India is being forced to unlock during pandemic. But it’s no green zone yet 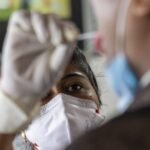