The holdings of the world’s largest gold-backed exchange-traded fund or ETF, SPDR Gold Trust, fell 0.2 per cent to 1,125.48 tonnes on Monday. 
New Delhi:  Domestic gold prices retracted on Tuesday after witnessing a rise as August gold futures fell 0.06 per cent to ₹46,072 per 10 gram. The bullion price surged ₹400 on Monday, while Silver futures on MCX declined 0.12 per cent to ₹48,127 per kg after it went up about ₹900 in the previous session. Also Read: Markets Open Firm On Global Cues, IndusInd Bank, Titan, Techm Among Top Gainers

According to Mint report, the price of the precious metal has declined almost ₹2,000 per 10 gram from a record high in May when it touched ₹48,000. Since then the gold prices have seen a decline with improvement in global risk appetite.

The demand for gold remains weak even as shops have opened up after more than two months of nationwide lockdown.

Meanwhile, gold prices surged in the global markets on the back of a weak US dollar and spike in Covid-19 cases across the world. Spot gold was up 0.4 per cent at $1,700.78 per ounce. The US dollar was near a three-month low against a basket of other currencies, making gold cheaper for holders of other currencies. Other precious metals including silver slipped 1.1 per cent to $17.66, while platinum ticked up 0.1 per cent to $833.10.

Gold is considered as a safe-haven asset in times of political and economic upheaval.

The traders will now closely watch on the US central bank’s policy meeting on Wednesday. The US economy unexpectedly added jobs in May after it recorded losses in the prior month, which bolstered equity markets.

The holdings of the world’s largest gold-backed exchange-traded fund or ETF, SPDR Gold Trust, fell 0.2 per cent to 1,125.48 tonnes on Monday.

Gold has remained volatile even as equities market returned to normalcy with the lifting of lockdowns boosting optimism. Although worries continue as the economic growth will still take time to come on track amid rising cases across the world. The World Bank has estimated the global economy will contract the most since World War II. 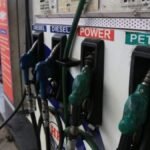