The Centre is also likely to push the privatisation of some state-owned enterprises, a senior government official said.

PRIME Minister Narendra Modi’s announcement of a Rs 20 lakh crore package to help cushion the Covid economic impact and set the stage for “self-reliance”, could pivot around measures that the government is set to unveil in a staggered manner starting Wednesday.

“Land, labour, liquidity and laws” — that was how the PM defined the key themes of the package. This is likely to translate into: steps to bolster liquidity for the Micro, Small and Medium Enterprises (MSMEs), among the worst impacted sectors; a push to the process of monetisation of surplus land assets held by Ministries and Central PSUs; a state-led easing of labour regulations and additional tax breaks for companies investing above a certain threshold in technology-intensive sectors like pharma, medical devices and telecom equipment.

Over the next few days, Finance Minister Nirmala Sitharaman will provide details of the package that is likely to include measures to boost local manufacturing, help improve India’s competitiveness in a global economy, and provide relief to the distressed poor, labourers and hapless migrants.

MSME Minister Nitin Gadkari had, on April 24, indicated the possibility of setting up a Rs 1 lakh crore revolving fund for MSMEs. The government’s plan is expected to ensure higher working capital limits, clearance of pending dues and credit guarantee against loan losses to MSMEs so that banks lend to them.

Speaking to The Indian Express, NITI Aayog Vice Chairman Rajiv Kumar said: “You will see a spate a reforms now, as you have seen in case of labour reforms in the states. (The PM) is bent upon turning this crisis into an opportunity, and I think this is what will happen.”

Asked if the government has the fiscal space for such a package, Kumar said: “Even the sternest of fiscal hawks have stopped asking that question…If you get the GDP to grow, the fiscal space gets created. On the other hand, if GDP stops growing, then same fiscal expenditure becomes much bigger (as a percentage of GDP), the ratio (fiscal deficit) becomes much bigger.”

The Centre is also likely to push the privatisation of some state-owned enterprises, a senior government official said. 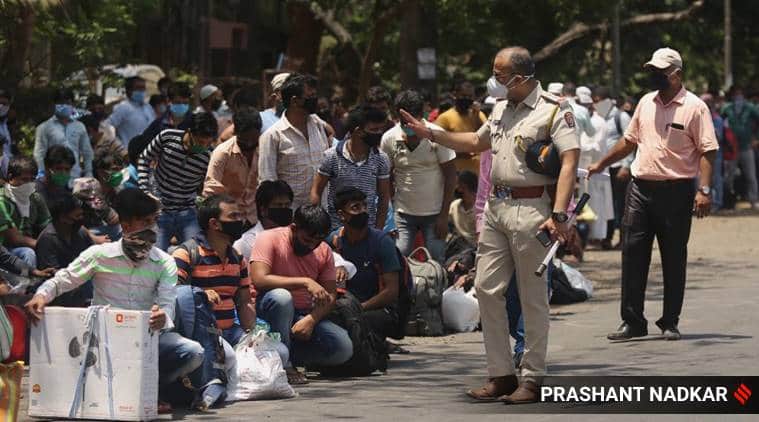 One of the busiest stations for trains route to North India, the Lokmanya Tilak Terminus in Mumbai, shut during the lockdown, saw heavy crowds on Tuesday.

On the labour reforms front, nine states have already tweaked laws to increase working hours. Madhya Pradesh, Uttar Pradesh and Gujarat have also announced suspension of labour laws for new companies for a period of nearly three years. An overhaul of central labour laws is also expected to follow suit.

Provident Fund contribution waiver for more small and medium companies is expected by expanding the ambit which already covers establishments with up to 100 employees with 90 per cent or more earning monthly salary less than Rs 15,000.

To provide wage support for organised sector workers, the government has been collating data for companies which have filed their returns under the EPF scheme but have deferred the payment of their contribution of dues. Similar support measures could be extended for migrant workers, with the government already having collected identification details for over 22 lakh workers.

The Prime Minister said that in a globalised world, self-reliance is different from being self-centred, suggesting that the government will take steps to attract foreign investment, too.

While fresh measures are yet to be announced to provide liquidity in the economy, on March 27, RBI Governor Shaktikanta Das had announced three liquidity measures: targeted long term repo operations (TLTRO), cash reserve ratio cut of 100 bps and increase in marginal standing facility (MSF) to 3 per cent of the statutory liquidity ratio (SLR). The RBI said these would pump in Rs 374,000 crore to stabilise the financial system that was hit by the pandemic. 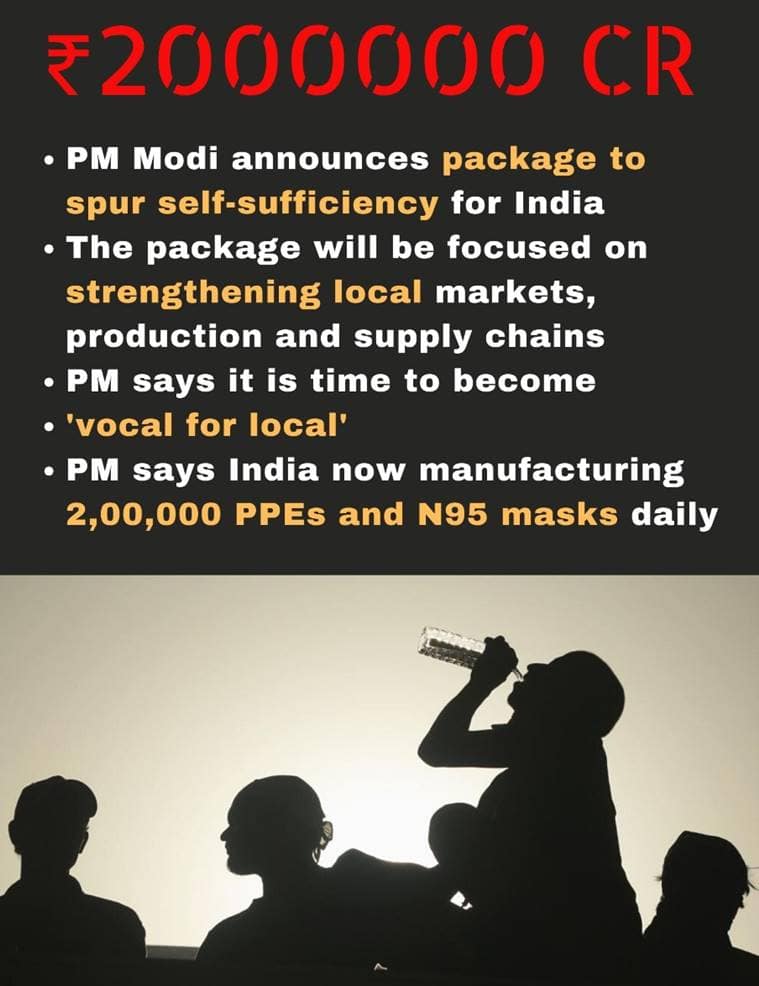 At 10 per cent of the GDP, India’s package is now in line with the stimulus given by many other G-20 countries including the US.

Three weeks later, the RBI stepped in again to release additional funds of Rs 1 lakh crore – Rs 50,000 crore refinance facility to banks for lending to NBFCs through a new TLTRO 2 and a Rs 50,000-crore refinance support to financial institutions. On April 27, it opened a special liquidity facility for mutual funds amounting to Rs 50,000 crore after Franklin Templeton announced the winding up of six credit risk schemes leading to redemption pressure in debt funds. The central bank, along with the government, is expected to continue the momentum in improving liquidity in the economy.

At 10 per cent of the GDP, India’s package is now in line with the stimulus given by many other G-20 countries including the US. This is also higher than the Rs 5-10 lakh-crore package being demanded by various industry associations to fight the Covid adversity.