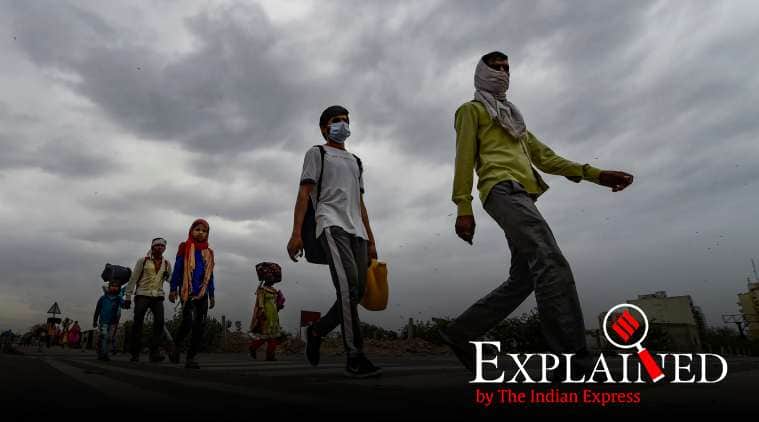 It is expected that the Finance Minister will announce the details at the earliest since this has a bearing on the bond markets. (PTI)

The Rs 20-lakh crore package announced by Prime Minister Narendra Modi sounds big but will burn only a small hole in the government’s finances. A large part of it, or as much as Rs 8.04 lakh crore, is additional liquidity injected into the system by the Reserve Bank of India through various measures in February, March and April.

Add to this the Rs 1.7 lakh crore fiscal package announced by Finance Minister Nirmala Sitharaman on March 27. The balance of the economic package, details of which are not yet known, then stands at Rs 10.26 lakh crore. It is expected that the Finance Minister will announce the details at the earliest since this has a bearing on the bond markets.

Read this story in Malayalam 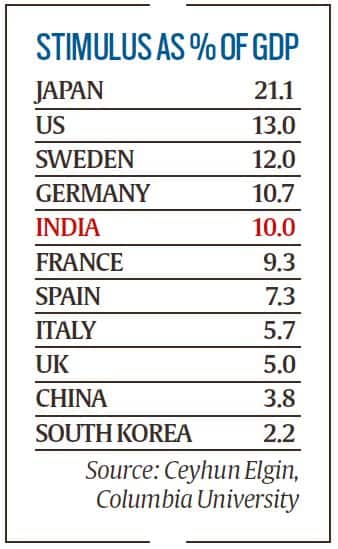 Stimulus as per cent of GDP.

The RBI statement on the borrowing calendar said the revision had been necessitated on account of the Covid-19 pandemic.

In other words, the cash handout the government could afford — given this ceiling — to extend to the poor, vulnerable and migrant workers, may be limited to Rs 4.2 lakh crore. But if this is innovatively leveraged, the multiplier impact on the economy could be significant, particularly when the Indian economy would have lost almost 47 days of output in the full year. Most global financial services research houses have estimated the Indian economy to contract by 0.4 per cent in 2020-21.

Sources said that money which remains after making cash transfers to the most needy was likely to be used in a way that it yields maximum gains. “For instance, if the government accepts the first 10 per cent loss in case of default by companies in specific sectors, it will incentivise banks that much more to lend. The big problem today is risk aversion of banks to extend credit,” said another source. This may not involve making a big allocation in the Budget but will go a long way in providing credit to companies worst affected by the pandemic.

Similarly, the MSME package devised by MSME Minister Nitin Gadkari, for instance, involves the government to insure a revolving fund of Rs 1 lakh crore put together by banks and financial institutions. “The government just provides guarantee to the fund… its a kind of insurance, which does not entail huge outgo from the Budget,” said the source. While the Rs 1 lakh crore helps the government in showing a big economic package, the actual cost to the exchequer will probably be a couple of thousand crores of rupees.

Further, the government can also recapitalise banks, helping their capital adequacy. “Again, we just have to account for the interest to be paid on the recapitalisation bonds, which also does not amount to any substantial outgo,” said a government official, who did not wish to be quoted.

The government, officials explained, cannot really afford a huge stimulus. “It is intended to provide relief and get the patient out of the ICU… There is no fiscal space to increase expenditure substantially,” the official said.

Even in the first fiscal package of March 27, money transfers immediately effected would add up to only Rs 61,380 crore over the next three months: Women Jan Dhan account holders – Rs 10,000 crore; widows, elders, and the disabled – Rs 3,000 crore’ farmers – Rs 17,380 crore; and, building and construction workers – Rs 31,000 crore from the Welfare Fund.

📣 Express Explained is now on Telegram. Click here to join our channel (@ieexplained) and stay updated with the latest The RBI statement on the borrowing calendar said the revision had been necessitated on account of the Covid-19 pandemic.The Rs 17,380 crore to be released to farmers was not an additionality, but already budgeted for in 2020-21. The government was only front-loading the payment of the first tranche of Rs 2,000 (of the budgeted Rs 6,000 per farmer a year under the PM KISAN scheme). Similarly, the money for construction workers did not require the government to borrow extra.

For all the latest Explained News, download Indian Express App.