NEW DELHI: Can the Indian Premier League (IPL) be organized in 2020? Will the richest cricket league replace the T20 World Cup scheduled to be held in Australia later this year?

Not hosting the tournament will cost the Indian cricket board (BCCI) losses to the tune of Rs 4000 crore. Even if the IPL is given the green signal by the Indian government, can the tournament be staged in India across multiple venues, like it used to, or somewhere abroad?

These are just some of the questions going through the minds of every Indian and foreign cricketer, fan, official, and other stakeholders.

India’s cricketers, cooped up in their homes for the last three months, are also longing for some action. From his Gurgaon home, opener Shikhar Dhawan hosted a web chat with Sri Lankan all-rounder Angelo Mathews in which he hoped that the IPL could be organized this year, since the tournament “spreads positivity across the world”.

“Hopefully, the IPL will take place. It’ll be good if it happens… of course, by taking care of all the security and all the things against (sic) corona. Regarding that, we have to be very, very careful,” Dhawan said. 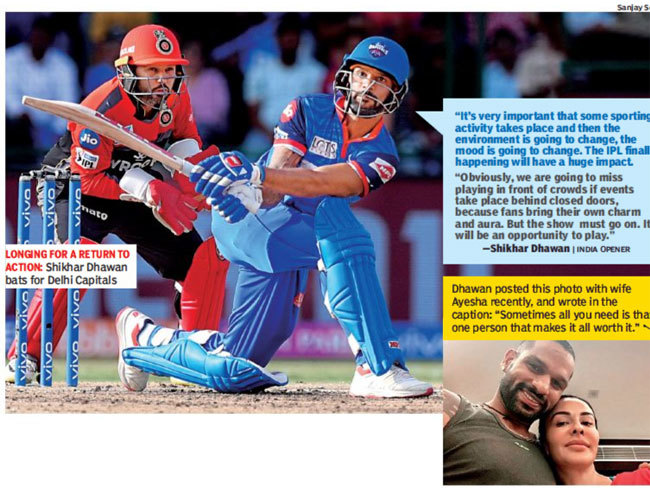 “It should happen because it’s good for us (India). It brings (in) a lot of positivity that spreads across the world. Right now, it’s all about corona news. It’s very important that some sporting activity takes place and then the environment is going to change, the mood is going to change. (The) IPL (finally) happening will have a huge impact,” Dhawan said.

“Once we go back (on the field), we will all be very hungry to play and perform for our teams. It’s going to be good fun at the end of the day. When we are playing, it is always a good feeling,” said the Delhi Capitals batsman.

An IPL played without spectators won’t be the ideal scenario but if it enables resumption of sport, Dhawan is all for it, for the “show must go on”.

“Obviously, we are going to miss playing in front of huge crowds if tournaments take place behind closed doors, because fans bring their own charm and aura. The fans bring a huge energy to the stadium. We’re going to miss it. But at the same time it will be an opportunity (to play) as we have been sitting in our homes for two-three months now,” Dhawan said.

“Whether spectators are there are not, a professional cricketer knows that he has to do his job. So we have to do our job, but at the same time we’re going to miss the crowd as well,” the 34-year-old said.

On a lighter note, Dhawan said: “I hope (at least) there are lots of ball boys in the stadium, otherwise we might have to go and pick the balls from the stands!”

Professional sport is on the cusp of re-emerging without crowds. Germany is hosting the Bundesliga behind closed doors, and the Spanish La Liga as well as the English Premier League are likely to follow the same route.

As of now, the two biggest cricket tournaments scheduled this year – the IPL and T20 World Cup – appear to be on a collision course. The 2020 IPL was originally scheduled to be organized between March 29-May 24 before it was indefinitely postponed as India went into a nationwide lockdown.