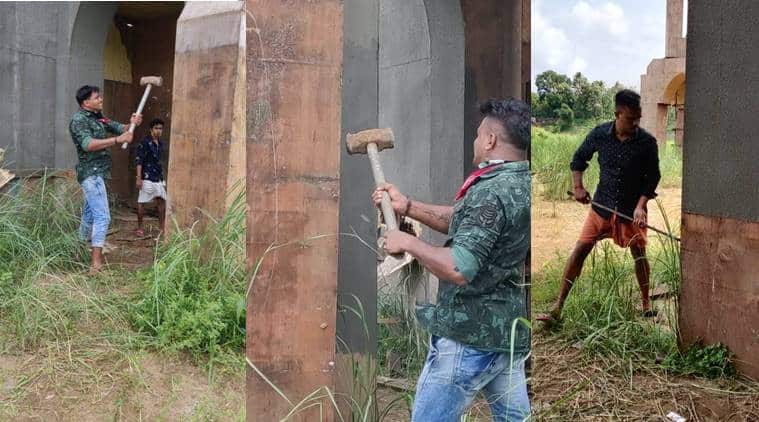 The vandalising of the set was brought to light by Hari Palode, general secretary of the right-wing outfit Antarrashtriya Hindu Parishad (AHP).

The Perumbavoor Police in Kerala have registered an FIR Monday and began investigating the vandalizing of a film set by members of a right-wing Hindu group. The set, resembling a church, erected by the art team of the Tovino Thomas-starrer ‘Minnal Murali’ on an island on the banks of the Periyar on the outskirts of Kochi was found vandalised with a leader of a fringe Hindu outfit claiming responsibility for the same on Facebook.

Kerala Chief Minister Pinarayi Vijayan, whose government completed four years on Monday, promised tough action against the right-wing outfits at a press briefing. “Such incidents have no place in Kerala. The film set was built in March spending lakhs of rupees. But because of Covid lockdown, the work got stuck. Now, there are reports of Banjrang Dal having vandalised it last evening. This is clearly aimed at provoking religious sentiments. Kerala is not a land where such communal forces can thrive. The government will take strong action. There is no doubt about it.”

“The FIR has been registered though we haven’t added the sections yet. Our officers are investigating. We will have more developments in a few hours,” an officer at the Perumbavoor police station said.

The vandalising of the set was brought to light by Hari Palode, general secretary of the right-wing outfit Antarrashtriya Hindu Parishad (AHP), who admitted on Facebook that his group along with Bajrang Dal members proceeded to destroy the set purportedly because it stood opposite the Shiva temple at Kalady. “When they were building it, we had said no. We had submitted complaints. We don’t have a habit of pleading so we decided to demolish it. We have to protect our self-respect,” he wrote in his Facebook post, accompanying photos of the said act.

The imposing temporary church set, worth lakhs, had been erected in March to shoot the climax scenes of the film which is directed by young filmmaker Basil Joseph. But when the Covid-19 lockdown as imposed in mid-March, the crew had to suspend shooting of the film.

Joseph, who has also acted in several movies, wrote on Facebook, “I don’t know what to say. For some people, this may be a joke, a troll, political or publicity move. But for us, this was a dream. Till a few days ago, when we used to look at the photograph of the set, we used to feel proud. When shooting got suspended, we were sad and uncertain about when we can resume working. We have been working on this film for the last two years. We have put a lot of sweat into making it. The art director and his team built it over several days in the hot summer sun. We had taken all permissions. At a time when we are all fighting against a pandemic together, when we all stood with uncertainty, we didn’t think even in our dreams that something like this could happen. Especially in Kerala. We are very sad and anxious.”

The incident sparked angry reactions from all sections of the Malayalam film industry.

Actor Tovino Thomas, who plays a local superhero in the film, wrote, “The reasons they cite for this unceremonious act are not understood to our senses till now. We’ve heard of movie sets being vandalised by religious fanatics in northern parts of Inida. Now it’s happening to us right here.”

“These are anti-social elements who are uncomfortable seeing a church in front of a temple. Their act is not against the film ‘Minnal Murali’ or its crew. Their act is against Kerala,” actor Maala Parvathy wrote on Facebook.

Director Aashiq Abu wrote, “Sangh terrorists who are provoked even by film sets must be stopped at any cost. The Malayalam film industry will collectively fight against such extreme activities. Solidarity with the team of ‘Minnal Murali’.”