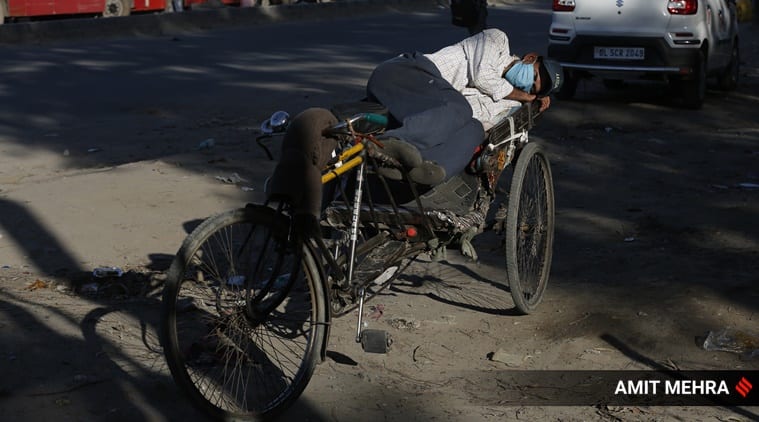 He spent the next two months sleeping on a park bench in Dwarka and near a municipal toilet in the area.(Representational/Express Photo by Amit Mehra)

“We were so happy to see him again, we couldn’t stop crying.” Santosh Pathak was describing the moment he and his wife were reunited with their 13-year-old son Vishal on Saturday after two months.

Vishal was “thrown out” of his house in Dwarka’s Sector 1 by the landlord in March while his parents were stuck in their village in Bihar when the lockdown was announced.

He spent the next two months sleeping on a park bench in Dwarka and near a municipal toilet in the area.

Pathak and his wife had gone to their village in Bihar’s Samastipur on March 15 to make arrangements for their daughter’s wedding, and expected to return by March 22. “Then the lockdown was announced and we couldn’t make the wedding arrangements or return,” Pathak said.

Meanwhile, his landlord kept phoning him to demand advance rent for the month of April. “On March 24, the landlord found one of our three children, Vishal, crying outside the house… he told him to leave and not return,” said Pathak.

Vishal ran away and his elder brother Prakash (20) and sister Divya (18) could not trace him. “Police made me sign a statement saying that the landlord has not thrown Vishal out,” Divya alleged. Police denied the allegation. “We came to know about the matter through Twitter. We enquired and found that the family didn’t file any complaint,” said a senior officer.

On April 8, Vishal was seen lying on a marble bench with some dogs sleeping around him inside a neighbourhood park in Dwarka’s Sector 7. Yogita Kumari (25), who noticed him, shared his story on social media.

The story went viral, drawing the attention of an NGO (India Cares) and IPS officer Arun Botha, who arranged for his parents to return from Bihar. On Saturday, upon seeing his parents, Vishal broke into tears, Kumari said.