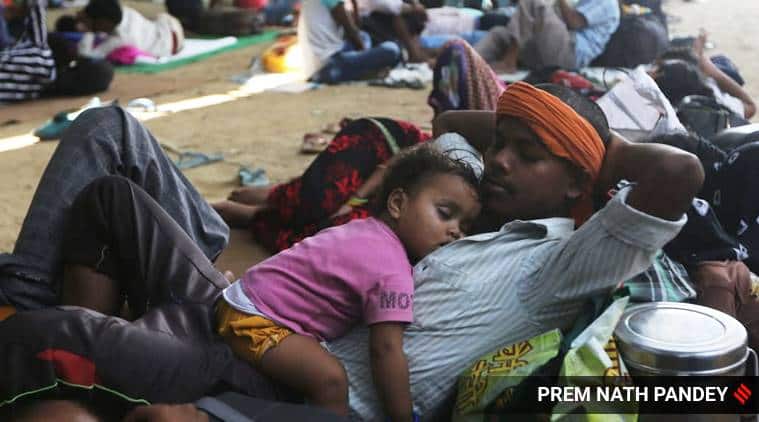 Stranded in cities due to the coronavirus-induced lockdown, migrant workers have sought to go home (Express Photo by Prem Nath Pandey)

The Centre may have done away with the need for destination states’ consent to ramp up services of Shramik Special trains, but states such as Bihar and Uttar Pradesh, which are major destination states for migrants, are grappling with logistics issues in handling the rush.

While Bihar has flagged capacity constraints to the Centre, Uttar Pradesh has sought local trains for movement within the state.

In a letter to Union Home Secretary Ajay Bhalla, Bihar Chief Secretary Deepak Kumar has said that to receive additional trains, the state requires those trains to carry passengers directly to the home districts of migrant passengers and halt at the stations in those districts.

“If this is not followed and trains bring passengers from different districts, then it will create huge difficulty for the administration,” Kumar said in his letter.

Uttar Pradesh, which has received — and is expected to receive — the most number of Shramik Special trains, has written to the Railways requesting Mainline Electric Multiple Units (MEMU) trains (like locals) on nine main routes in the state to replace buses to ferry migrant workers to various districts.

Most of the Shramik Specials in Bihar are bringing passengers to central points like Danapur near Patna, from where 30 buses take passengers of each train to their districts.

“We are handling around 50 trains per day, which means around a lakh passengers in a day. We have been receiving these trains as per our capacity. Consent is not a problem and everyone stranded should come home. We have told the Centre that if you want to give us more trains then send the trains as per our requirement, or else we will have difficulty in increasing the number of trains,” Kumar told The Indian Express.

Without striking a discordant note to the Centre’s policy, the letter says the state can receive more trains if they are sent as proposed.

“If the passengers are sent appropriately as discussed above, it will put less burden on us in transporting those migrant workers and in that case we can even receive trains every two hours, that is six trains per day in each route, which implies per day an additional 54 trains,” the letter said.

Read| Migrants back in Bihar show high positivity: 1 in 4 tested from Delhi

Bihar so far has received 367 Shramik Specials and consent has already been given for 575 additional trains from Gujarat, Maharashtra, Punjab, Delhi and Uttar Pradesh.

“In buses there may be chances of accidents; the bus driver may be tired, and we have taken all the buses available, school buses and all, for the existing trains,” Kumar said.

Bihar has asked for 54 additional trains daily but in nine district-wise routes. The nine routes have three halts, each in a district, carrying passengers from four far-flung districts. For instance, one route covers Katihar-Purnea-Araria and it has suggested that only passengers from these three districts and from Kishanganj be in the trains on this route.

Uttar Pradesh Additional Chief Secretary Awanish Kumar Awasthi wrote to Railways earlier this week seeking MEMU trains for transporting migrants on nine routes. It has so far received around 900 of the 1,800 Shramik Specials that began operation since May 1.  Railway officials told The Indian Express that the proposed regular services can completely eliminate the need for buses and other options involving roadways. Twenty-five migrants were killed in a road accident in Auriya in Uttar Pradesh last week.

The routes suggested connect places like Ghaziabad, Barabanki, Tundla, Kanpur, Varanasi, Shjahanpur etc. “We have started a service from Lucknow to Shaharanpur and a few other places, and have inspected the feasibility of other routes,” said Lucknow Divisional Railway Manager SK Tripathi.